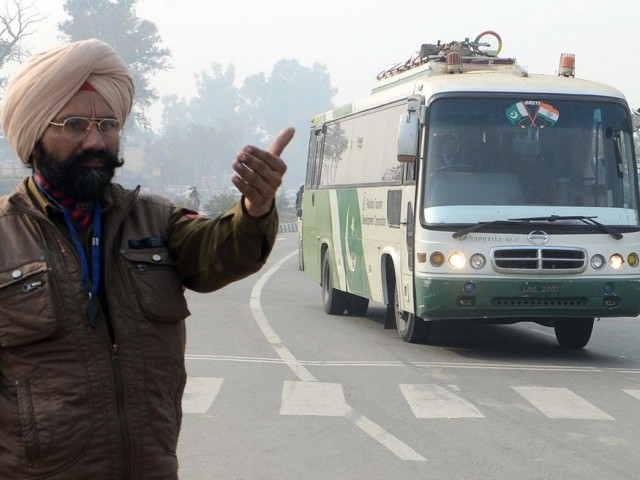 In this file photo, an Indian Punjab state policeman stands guard as a bus from Pakistan passes on the outskirts of Amritsar. PHOTO: AFP

MUZAFFARABAD: Barely 48 hours after the suspension of trade between Azad Jammu and Kashmir (AJK) and Indian-administered Kashmir, AJK authorities announced that the Muzaffarabad-Srinagar bus service would also be suspended for a week starting today (Monday).

“We will meet Indian authorites at the Chakothi LoC (Line of Control) crossing point today (Monday) to discuss the issue of trucks detained by both sides,” AJK Travel and Trade Authority (TATA) Director General (DG) Brigadier (retd) Imtiaz Wain said on Sunday. “In light of the situation, we have decided to suspend the Muzaffarabad-Srinagar bus service for a week.”

Authorities in Indian-administered Kashmir Friday night detained 22 trucks carrying goods from AJK after claiming they had recovered 10 kilogrammes of narcotics from one of the vehicles. TATA denied the charge after being notified and called upon Indian authorities to share the evidence of the seized drugs and return the driver of the truck in question for investigation.

When Indian authorities refused to do so, TATA retaliated by detaining 50 trucks and drivers from Indian-administered Kashmir at the Chakothi Trade Facilitation Centre.

Talking to The Express Tribune, Brig (retd) Wain said India had no right to detain any passenger, driver or trader under the cross-LoC trade agreement. “Doing so is a violation of the agreement and is unacceptable for TATA,” he said.

Both sides are working at the diplomatic level to settle the issue amicably, the TATA DG added.

Meanwhile, the president of the AJK wing of the Intra-Kashmir Trade Union Khurshid Ahmad Mir has appealed to the Indian authorities to release the driver. “The driver is innocent. AJK and Indian authorities should arrest the traders [whose goods the truck was carrying] instead,” he said.