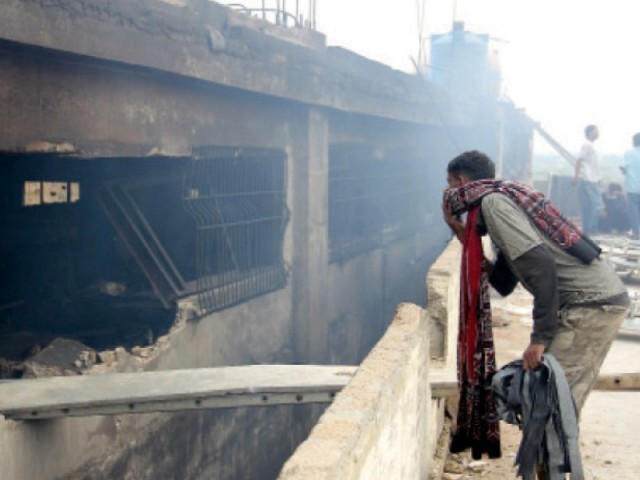 The Baldia factory fire erupted on September 11, 2012, and claimed the lives of more than 250 factory workers. PHOTO: FILE

KARACHI / ISLAMABAD: Political parties have called upon the government to take the Baldia factory fire as a test case if it wanted to eliminate terrorism as they blamed the Muttahida Qaumi Movement (MQM) for the deadly blaze.

The Pakistan Tehreek-e-Insaf (PTI) demanded that MQM chief Altaf Hussain be tried for the deaths of more than 250 factory workers. The government must seek the return of the exiled leader so that he can be tried for the deaths of poor factory workers, who “fell victim to MQM’s extortionist agenda and paid for it with their lives”, said PTI Information Secretary Dr Shireen Mazari in a statement.

On Friday, Rangers submitted before the Sindh High Court a joint investigation team’s (JIT) report, which claimed that the MQM was behind the fire that claimed lives of at least 258 factory workers in Baldia Town area of Karachi.

“It is shocking but not surprising to see the findings of the JIT on Baldia Town factory fire which annihilated lives of at least 258 workers,” Dr Mazari said.

Jamaat-e-Islami Ameer Sirajul Haq termed the incident ‘the worst kind of terrorism,’ and said the nation deserved to know why the JIT report was kept secret for over two and a half years. “If the provincial and federal governments are sincere about tackling the menace of terrorism, the Baldia Town factory carnage is a test case for them,” he added.

Addressing a press conference at Karachi Press Club, Mohajir Qaumi Movement chief Afaq Ahmed claimed that he had evidence that the MQM was involved in the Baldia factory fire.  “The plan to set the factory on fire was hatched at the Governor House,” he alleged.

Talking to The Express Tribune, a member of the MQM Rabita Committee said the party had no connection with Rizwan Qureshi, the man named in the JIT report. “The MQM has hundreds of workers. Anyone can pretend to be a party worker and use our name,” said the committee member. “The party has a zero tolerance policy for extortionists, terrorists and criminals.” The party appealed to the media to not identify the culprit as a worker of the MQM.