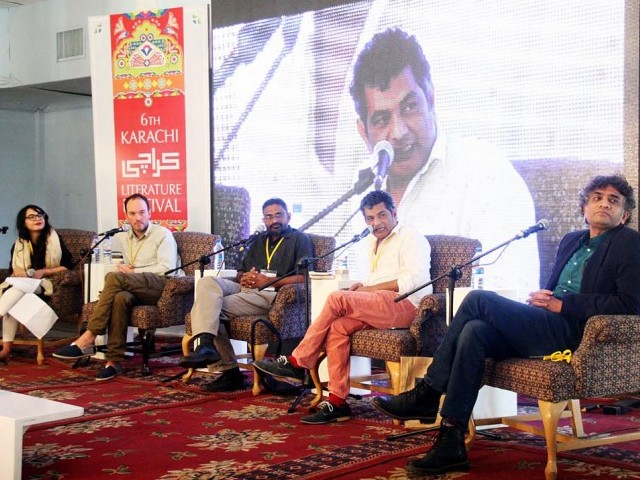 Akar Patel, Bin Yameen, Muhammad Haneef, Elex Preston and Humayun taking part in a debate on the World as the Author Sees It on the 2nd day of the 6th Karachi Literature Festival. PHOTO: ONLINE

More often than not, Saadat Hasan Manto’s popularity is based on his short stories rather than his essays, even though the latter offers a detailed scrutiny of the Partition of India. In order to set the ball rolling for a wider discourse on this issue, a translation of his essays was launched on the second day of the sixth Karachi Literature Festival on Saturday.

‘Why I write: Essays by Saadat Hasan Manto’ has been edited by Aakar Patel, an Indian journalist and columnist, and revisits Manto’s essays to understand his views on Partition. Patel emphasised the importance of rediscovering Manto through his essays to understand the challenges that plague the subcontinent.

“The body of his work isn’t just a testament of remarkable storytelling,” he said. “Manto has predicted the trajectory of Pakistan and India’s future.”

A panel comprising Nauman Naqvi and Kamran Asdar Ali, academics at Habib University and the University of Texas, respectively, discussed the merits of using Manto’s essays as lens to understand Pakistan’s national identity.

According to Naqvi, Manto was a dispassionate observer of Partition and had the ability to foresee the violence triggered by this historic event. However, he also warned against viewing the essays as predictions for the future.

“We must remember that he was pointing towards a possibility and wasn’t writing with complete certainty,” he said. “Unfortunately, academics have frequently tried to graft their own perceptions of national identity into Manto’s works. This has produced contradictory results.”

Ali said this tendency could divert attention from the true essence of Manto’s works. “His essays and short stories don’t focus entirely on Partition,” he said. “On the contrary, we have made him out to be a ‘Partition writer’ and revisit his work to find solutions for failed governance.”

Nonetheless, he maintained that Manto’s essays, unlike his short stories, offer solutions to the problems that plague the nation.

Patel recognised the dangers of using Manto as a linchpin to understand Partition. However, he maintained that the simple and readable nature of his work offer a useful starting point to explore this facet of the subcontinent’s history.

He said that Manto’s work also helped Indian readers understand the history of violence in their country. “Manto has provided an objective view on the interplay between religion, secularism and violence,” he added.

Najam Sethi and his world