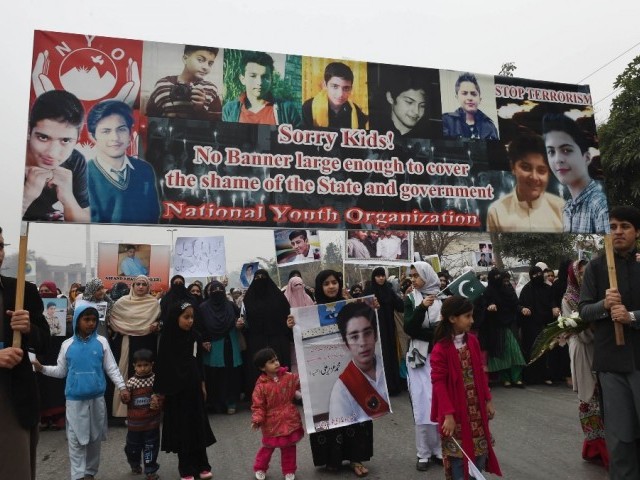 Relatives of schoolchildren killed in Taliban attack on Army Public School (APS) protest against delays in the investigation in Peshawar on February 7, 2015. PHOTO: AFP

PESHAWAR: Hundreds of parents, students and activists Saturday protested outside the school where Taliban militants murdered 153 people over the “sluggish” police investigation into the massacre.

The group gathered at the Army Public School in Peshawar to draw attention to the slow investigation. They say that since the December attack there have been no breakthroughs and they have received little information on the inquiry’s progress.

The school was the site of Pakistan’s deadliest ever terror attack on December 16 last year, in which 134 children were among those killed by heavily-armed militants.

“Sorry kids! No banner large enough to cover the shame of the state and government,” read one banner carried by the protesters, which also had pictures of some of the children killed in the attack.

“Our children were martyred and martyrs never die. They are telling the government not to waste their sacrifice and protect other children,” Raza Bangash, who lost his 14-year old son, told AFP.

“We want a judicial inquiry as we are not satisfied with the ongoing investigations because there seems to be no progress,” Bangash said, as women around him wept clutching portraits of their children.

Saeed Shah, another affected parent, said they were “being kept in the dark about the investigations,” and called on the authorities to be more transparent in their dealings with victims’ families.

Peshawar’s administrator Riaz Mehsud visited the protesting parents and assured them that the government would do all it could to help.

“I stand by you and the provincial government will support you and redress all your grievances,” Mehsud told parents.

In the wake of the attack, the government lifted a six-year moratorium on executions for people convicted of terrorism and 22 militants have been hanged since then despite protests from the international community and human rights watchdogs.

The country has also amended its constitution to allow military courts to try terror suspects.

The military said on Saturday that it had received the first batch of 12 terrorism cases to be tried in military courts.

Pakistan’s troops have been engaged in a full-scale offensive against Taliban and other militants in North Waziristan and Khyber tribal districts since June last year.

At the time of the Peshawar attack, the Taliban said it was retaliation for the army’s continuing operation against militants in the tribal areas.