PCB chief Shahra­yar Khan says Ajmal would still not be able to partak­e in the World Cup due to ICC laws
By Web Desk
Published: February 7, 2015
Tweet Email 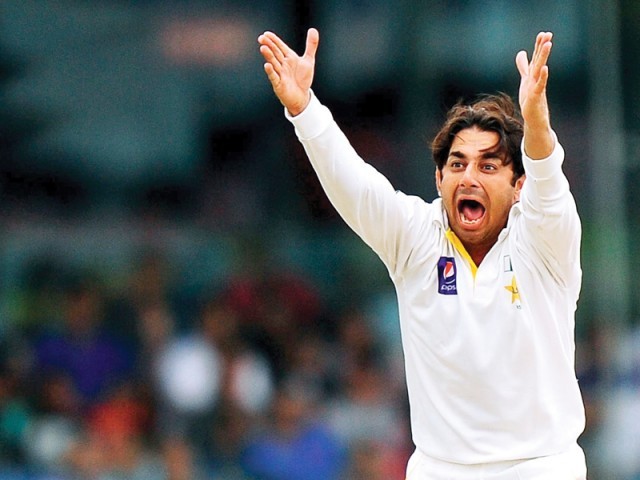 Saeed Ajmal’s bowling has been cleared by the ICC after tests conducted on the banned Pakistan off-spinner at the ICC-accredited laboratory in Chennai on Friday, Express News reported.

However, PCB chief Shahrayar Khan said Ajmal would still not be able to partake in the World Cup due to ICC laws. Khan welcomed the news and lauded Ajmal’s dedication when it came to correcting his bowling action.

Bowling actions of Saeed Ajmal and Sohag Gazi found to be legal. http://t.co/B4X9mQ4uKS

Earlier, the Indian Express reported that coaches present during Ajmal’s test said there were marked changes in his action and predicted that he has every chance of getting cleared by the ICC experts.

The report has been sent to the ICC headquarters in Dubai.

Soon after completing his test, Ajmal said that “earlier I used to bring my bowling arm from behind my body. Now it is more of side on. Likewise, my front foot used to be on the air but now I keep my delivery strike on the ground.”

The 38-year-old who was suspended from bowling in international cricket last September for illegal bowling action credited former Pakistan offie Saqlain Mushtaq for helping him out.

Later in the day Ajmal, while addressing the media outside PCB headquarters, said he was very happy that his bowling action had been cleared, and said he hoped to announce his return to international cricket soon as well.

“I am grateful of everyone’s support during this difficult time,” he said.

“I wish the Pakistan team good luck, and I don’t want anyone to come back injured only for me to step in for them,” Ajmal added.

“However, if it is extremely necessary, I will try to be fit as soon as possible to join the team.”

“I am working out and practicing, and hopefully, soon I will return to play for the Pakistan team,” the bowler said.

In response to a question about retirement, Ajmal said, “If I intended to retire, I would just leave. But right now, I have no such intentions.”

“I would like to continue to play for Pakistan for another three to four years. And I want to do as much as possible for Pakistan,” he said.

Regarding a question about the announcement of players participating in the upcoming World Cup 2015, Ajmal said, “I will only play if I am able to give the same performance as I have in the past.”

Further, Ajmal said he was hopeful of being ready within a month.

“Pakistan and India both have balanced teams. I am backing Pakistan and we will win this match,” he said.

“In this World Cup, Pakistan will play better than India,” he added.