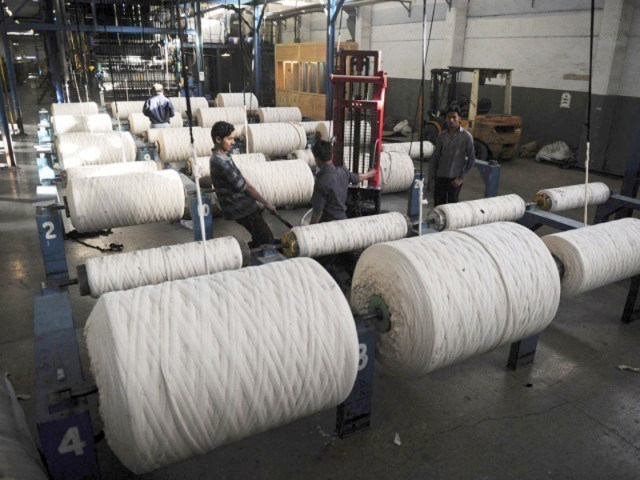 PHMA Chairman said that spinning companies were making profits and there is no report of any closures while the value-added textile industries have been suffering huge losses. PHOTO: AFP

KARACHI: In response to the government’s suggestion to increase import duty, exporters of finished textile products on Friday urged the government to not only drop the proposal but also abolish the existing 5% import duty on cotton yarn.

The demand came at a press conference that was attended by the leaders of different value-added textile associations at the Pakistan Hosiery Manufacturers Association (PHMA) office here.

PHMA Chairman Muhammad Jawed Bilwani said that spinning companies (yarn makers) were making profits and there is no report of any closures while the value-added textile industries have been suffering huge losses.

“Several of them have been forced to close down just because of high costs of doing business and the 5% duty on import of cotton yarn is adding to their burden.”

According to Bilwani, there has been mass closure of weaving units. “If the cost of doing business, especially the price of raw material, is brought down, the whole textile value chain will get benefits.”

Giving an example, Bilwani said if the exporters get foreign orders, then they will give more orders to weaving units and this will save many of the units that are on the verge of closure.

He said that the value-added textile exporters, who recently participated in Heimtextil fair in Germany, bagged a considerable amount of orders but their exports can take a hit if local yarn prices remain high.

Similarly, several sportswear manufacturers and exporters from Sialkot, who participated in the sportswear exhibition Texworld in Turkey, also received orders that can be affected in coming months.

“The spinning sector has always advocated for a free market mechanism, but where is the free market now?” Bilwani asked. He suggested that in case the government desires to continue the import duty on cotton yarn, then it should also impose duty on the export of cotton yarn.

“There should be no duty on import or export of cotton yarn because under the prevailing circumstances, the value-added textile export sector would be adversely affected.”