Pakistan to send draft trade accord to Turkmenistan soon

Pakistan to send draft trade accord to Turkmenistan soon

Plan is to establ­ish strong linkag­es with Centra­l Asia and Russia.
By Our Correspondent
Published: February 4, 2015
Tweet Email 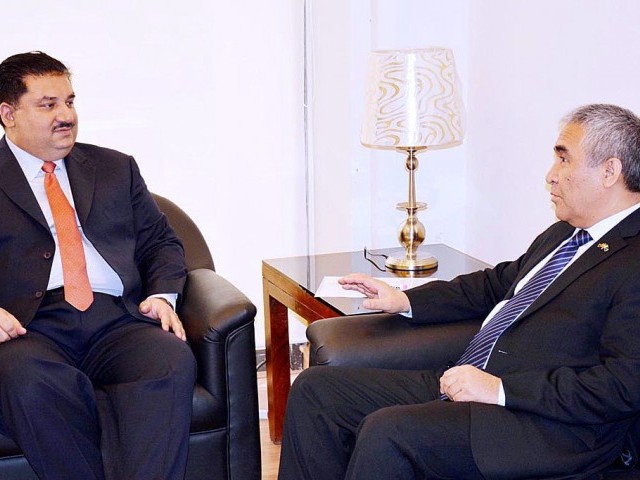 ISLAMABAD: Pakistan has proposed to Turkmenistan to sign a transit trade agreement in a bid to establish strong trade linkages with Central Asian countries, which may be extended further to Russia.

The Ministry of Commerce will forward the draft of the proposed transit trade agreement to Turkmenistan officials in the next few days for further deliberations.

This was discussed in a meeting between Federal Minister of Commerce Khurram Dastgir Khan and Turkmenistan Ambassador Aladjan Movlamov here.

The transit trade agreement will establish another trade corridor in Central Asia where goods will be traded with greater ease and in larger quantities.

In the beginning of January, the first meeting of the Pakistan-Afghanistan-Tajikistan Trilateral Transit Trade Agreement was held which proved very fruitful. The three sides will meet again in February in Dushanbe with the first draft of the trilateral transit trade agreement and the final draft will be brought on the table in March in Kabul where the accord is expected to be signed.

Commerce Minister Dastgir also proposed the establishment of a joint business forum, which will include businessmen of Pakistan and Turkmenistan, to strengthen coordination between the private sectors.

The Trade Development Authority of Pakistan will sign a memorandum of understanding (MoU) with the trade promotion organisation of Turkmenistan to remove procedural hurdles to bilateral trade. The minister also discussed ways to simplify the visa process for businessmen on a reciprocal basis. “This will encourage more businessmen to travel to each other’s country and explore new trade opportunities.”

The ambassador was requested to provide the Ministry of Commerce with the calendar of events and exhibitions to be held in Turkmenistan this year so that participation of Pakistani businessmen and investors could be ensured.