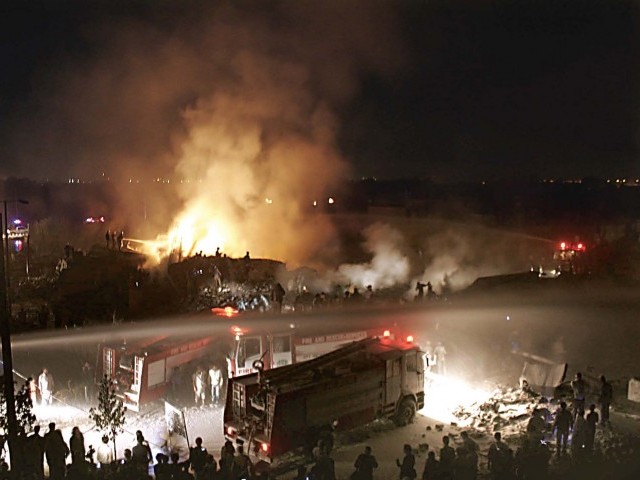 The crew of the plane — that crash-landed in Naval Housing Scheme (NHS) residential area early Sunday morning — included seven Ukranians and one Russian. Three Pakistani labourers were also killed on the ground when the plane crashed into the bungalows under construction in NHS. PHOTOs: ATHAR KHAN/EXPRESS

KARACHI: Civil Aviation Authority spokesperson Pervez George told the Express Tribune on Monday evening that investigators were still on the lookout for the black box of the Russian cargo plane that crashed in Karachi on Sunday.

George said that the black box would give vital clues into why and how the fatal incident occurred.

Although it’s been more than 36 hours since the aircraft went down, George says there is no reason to panic about the device. “The black box is somewhere under the debris in the naval colony and soon we’ll announce its discovery,” he said.

Police Surgeon, Doctor Hamid Patel said some bodies have been identified and have been released to the victims families.

9 out of 11 bodies recovered

Rescue workers pulled nine bodies out of the 11 men killed from the site of the plane crash in Naval Housing Scheme (NHS) residential area on Sunday.

Three labourers, Khuda Baksh, Aijaz and Shahid, working at bungalows under construction in NHS, were also killed. Edhi spokesperson Anwar Kazmi said these three bodies were sent to Multan, while the remaining six were being kept at the welfare organisation’s morgue. “Three out of those six can be somewhat recognized, but the rest of the three are just bits of flesh with one or two hands and toes strewn together,” Kazmi said.

Russian consulate press secretary Alex Zenkae said although the plane was manufactured in Russia, it was operated by a Georgian private airline, Sunway. He added that they were in touch with the family of Russain national Alexander and his body would be flown back once it was identified through DNA tests.

According to sources at the Jinnah International Airport, the aircraft bearing flight No. MCC-4411 arrived in Karachi at 1600 hours from the UAE’s Fujairah emirate and was on its way to Khartoum, Sudan when it crashed within two minutes of take off. It was carrying a load of 32 tons, most of which was tents used in humanitarian assistance. “The plane’s estimated capacity was between 70 and 80 tons, so it wasn’t over loaded,” a senior official said.

The plane was chartered by a local company Executive Air, while the cargo was provided by Vision Air. The handling agent of the aircraft was Shaheen Airport Services.

“These type of cargo planes are classified as non-scheduled flights since the arrival details are not known until a few hours ago or just a day before,” an official said, adding that a number of such cargo flights come and go from the UAE and Afghanistan.

No Pakistani flight engineers checked the aircraft before it took off. “This is normal operating procedure since such cargo aircraft have their own engineers who give the go-ahead to fly to their crew,” he said.

Civil Aviation Authority spokesperson Pervez George said that an investigation committee had been formed to probe the incident, which includes Air Commodore Khwaja Abdul Majeed and Group Captain Dr Abdul Boogio. When asked what happened to the report expected by the committee formed when another plane crashed four weeks ago on November 5 in the city, George said “that team is still investigating the incident.”

Earlier, there was absolute chaos at the Naval housing colony when the plane crashed at around 1:50 am. Hundreds of people rushed into the well-guarded residential area when the incident took place as soon as the gates were opened to allow ambulances and fire brigades inside. Many parked their cars in the middle of the road that caused hardships to the rescue workers. Pakistan Airforce Firefighters Nadeem and Qaiser, who brought two of their fire engines said normally it would have taken them just five minutes to reach the spot, but the hurdles on the way kept them waiting for an hour on the road.

Many youngsters at the crash site freely lifted pieces of the aircraft as souvenirs while making video recordings with friends on mobile phones. The Naval Police showed up late around 5 am when people were forced out of the area amid announcements: “Kick out all these civilians” on megaphones.