Altaf assert­ed that the AHU will not discri­minate among its studen­ts on the basis of ethnic­ity, religi­on or sect
By Z Ali
Published: January 31, 2015
Tweet Email 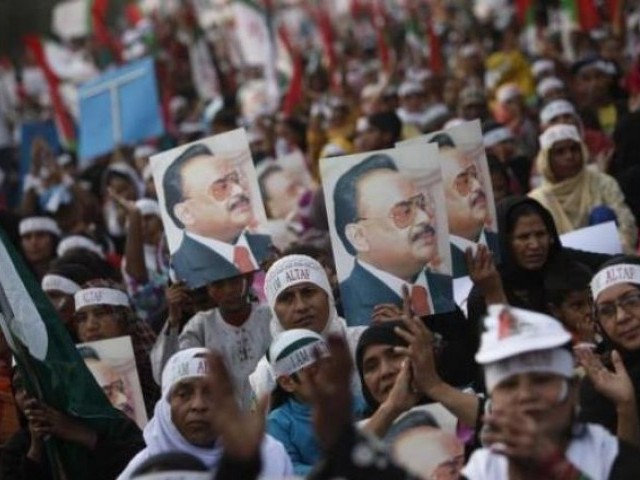 Altaf asserted that the AHU will not discriminate among its students on the basis of ethnicity, religion or sect. PHOTO: REUTERS

MQM chief Altaf Hussain, in his telephonic address from London, congratulated the people of Hyderabad and thanked Malik Riaz and PPP Co-chairman Asif Ali Zardari for their support.

“Building a university in Hyderabad had become a political issue,” observed the governor who narrated how he and Malik Riaz decided to establish two AHUs in Hyderabad and Karachi, respectively.

“I found the governor very worried during a meeting where he told me about the upsetting remarks which an MPA made in the Sindh Assembly that a university in Hyderabad will not be established because only Urdu-speaking people will get education there,” recalled Riaz.

“I instantly agreed to build a university, met Zardari to discuss the proposal and he not only agreed but also advised me to name the varsity after Altaf Hussain and promised to provide free land for the varsity.”

Meanwhile, Altaf asserted that the AHU will not discriminate among its students on the basis of ethnicity, religion or sect. “Sindhis, Punjabis, Pathan, Seraiki, Hazara and the people of every other ethnic group or religion will get admission on the basis of merit,” he assured.

A plot of 80 acres has been purchased at the cost of Rs380 million from the Hyderabad Development Authority for the construction of the university, which, after its completion in two years, will offer education in business studies, pharmacy, information technology, mass communication and other subjects of social sciences. A model school will also be built on the AHU’s premises.

The MQM chief urged the government to increase the budget allocation for education to establish more universities and schools in the country. The tuition fees at the AHU will be parallel to that charged at public sector universities, and not more.

Hyderabad, a district with an estimated population of over 3 million, lacks a public sector university owing to the proximity of three government universities in neighbouring Jamshoro district. However, as the admission quota of these varsities is divided among 12 or more districts in Sindh, the share of Hyderabad does not correspond with the number of graduating college students.