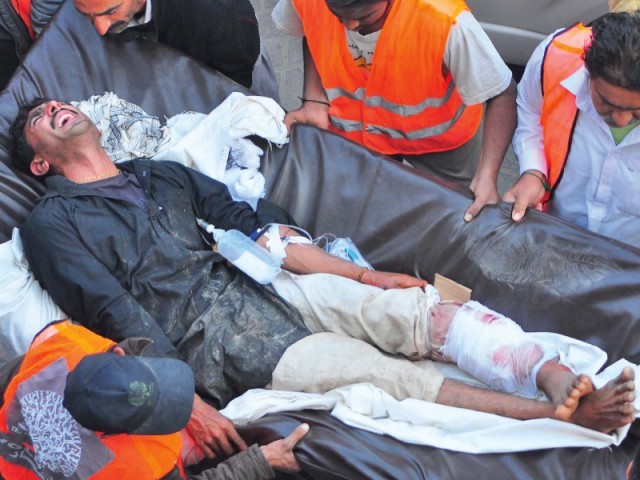 A powerful bomb tore through a crowded Imambargah during Friday prayers in a densely populated neighbourhood of Shikarpur city, killing at least 57 worshippers and wounding many more. The blast at Karbala-e-Moalla Imambargah in the Lakhidar area was the deadliest sectarian attack since the government introduced a new National Action Plan (NAP) dubbed a paradigm shift in the country’s long, deadly and costly fight against terrorism.

More than 300 worshippers were inside the double-storey compound of the Imambargah and the prayer leader, Maulvi Tanveer Hussain Shah, was delivering the Friday sermon when the bomb went off on the ground floor, according to witnesses.

The explosion was heard in several neighbourhoods of the city. Local resident Muhammad Jehangir said he had felt the earth move beneath his feet as he prayed at another mosque around 1.5 kilometres away. Hundreds of people rushed to the scene to try to dig out survivors trapped under the rubble of the Imambargah, which collapsed in the explosion, witness Zahid Noon said.

Television cameras captured scenes of carnage and confusion as people piled the wounded into cars, motorcycles, rickshaws and on donkey carts to take them for treatment. “The area is scattered with blood and flesh and it smells of burnt meat, people are screaming at each other… it is chaos,” Noon told AFP.

Later Edhi ambulances reached the site while ambulances from the nearby towns were also called in. According to rescuers, at least 15 people died while being transported to hospitals in Shikarpur and nearby Sukkur district. Some of the injured expired at the hospitals due to excessive bleeding and absence of doctors.

A spokesperson for the Edhi Foundation in Sukkur told The Express Tribune that up to 38 bodies were moved to the hospitals, while another 18 bodies were transported by other ambulance services. “In all, 57 people have died,” he added. Most of the injured have been shifted to hospitals in Sukkur and Karachi.

However, later AFP quoted Sindh Health Minister Jam Mehtab Daher as saying that “the death toll has increased to 61”. “There are 54 dead bodies in Shikarpur hospital. Seven others died in Sukkur and Larkana hospitals,” he added.

SSP Shikarpur Saqib Ismail Memon and DIG Larkana Saen Rakhio Mirani visited the site but didn’t talk to journalists there. Tahir Malik, DSP Bomb Disposal Squad at Sukkur, told The Express Tribune that it was neither a suicide bombing nor the device was planted at the Imambargah.

“It was a homemade device weighing around eight kilos,” he said, adding that ball bearings and metal pieces were also packed in the device to inflict maximum casualties.

A spokesman for the Jandullah militant group, a splinter faction of the outlawed Tehreek-e-Taliban Pakistan (TTP), said they were behind the blast. “We claim responsibility for attack on Shias in Shikarpur very happily,” Ahmed Marwat told AFP.

The president of the Shikarpur chapter of the All Pakistan Shia Action Committee, Maulvi Sikandar, claimed that there was no police guards at the Imambargah and volunteers from the community body-searched visitors at the gate.

The Jafria Alliance Pakistan demanded imposition of martial law in the province to stem the rising tide of terrorism. “Our prime concern is peace and security,” the alliance chief Allama Abbas Kumaili said at a news conference.

“If the democratic government fails to deliver and we can get these fundamental rights under martial law, then so be it,” he told a news conference where he also announced a province-wide strike on Saturday as well as three-day mourning. Several political and politico-religious parties backed the strike call.

The bombing triggered protests by the Shia community in several neighbourhoods of the city. The main sit-in was staged at Numaish Chowrangi while protesters also gathered on Shahra-e-Pakistan near Ancholi Society and at Jafar Tayyar Society in Malir. The number of sit-ins grew as the evening progressed and several parts of the city were reported to have shut down ahead of Saturday’s strike call.

It is the bloodiest single sectarian attack since March 2013, when a car bomb in the Abbas Town of Karachi killed 45. Violence against the Shia community has been increasing in recent years in Karachi and also in Quetta, Parachinar and Gilgit. Around 1,000 Shias have been killed in the past two years in the country, with many of the attacks claimed by the Lashkar-e-Jhangvi (LeJ) sectarian militant group.