In the dark again

In the dark again 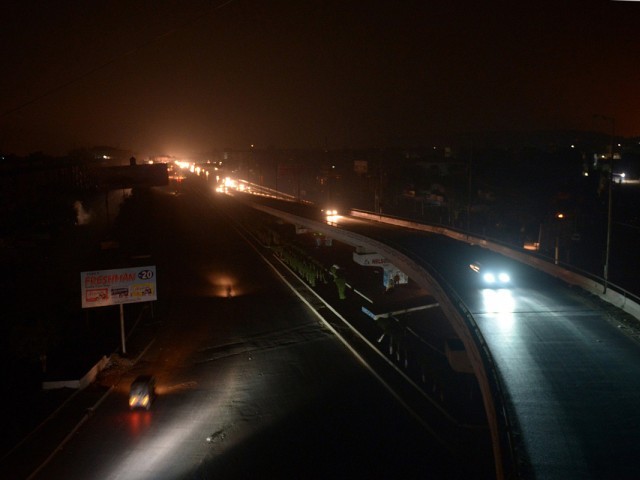 Motorists drive on an unlit street during a power cut in Karachi on January 25, 2015. PHOTO: AFP

Once again Pakistan has found itself both literally as well as metaphorically in the dark with much of the national electricity grid crashing on the night of January 24. Power was restored in most places by dawn on January 25, and the nighttime hours were abuzz with rumours of coups and conspiracies. The cause of the outage was slightly more prosaic in that it was caused by a transmission tower near Naseerabad in Balochistan being blown up by Baloch separatists. This was the third time in three weeks that the grid had been attacked in or near Naseerabad, but the attack on January 24 had by far triggered the most serious consequences. It caused a backward surge of power to the Guddu power station which tripped, and in doing so triggered a cascade effect across around 80 per cent of the country at its worst.

A host of questions flow from this incident, and thus far very few of them appear to have been asked by those who should be doing so, and even fewer answered. Given that Balochistan has been in a state of ferment for many years with an active insurgency constantly bubbling, one may wonder why there is not better security for a power transmission system that appears to be extremely vulnerable. With this being the third attack in three weeks on the grid system in the same area, the security forces appear to be less than on-the-ball — dilatory, even.

The power distribution system — the towers and wires and grid stations that supply electricity to the whole country — is in many areas old, poorly maintained and prone to failures without terrorist intervention. It is underfunded and part of a power sector that in the widest sense is a rolling national disaster that repeats day-on-day. It is unfair to lay all of the blame for this at the feet of the engineers who have the job of keeping this ramshackle collection of assets ticking over, as much of the responsibility lies in the realms of politics, a venal and corrupt bureaucracy. There are institutional deficits — with the monster of circular debt being but the most obvious — that successive governments have failed to vanquish despite having hurled billions of rupees at it.

Even though the system is back up and running, it remains teetering on the edge of failure because of the dangerously low levels of furnace oil stocks, which are essential to run the thermal power plants across the country. The daily blackouts are the result of the system being ‘managed’ in such a way as to ensure that most people get at least some electricity for parts of the day; though there are wide geographic variations in the duration of the power cuts with some places suffering more than others and rural areas everywhere suffering the most. Then there are the ever-present anomalies, such as the government shutting down gas supplies to state-owned plants in Punjab in order to keep the wheels of industry turning by powering the inefficient captive power plants run by the large textile manufacturing companies.

There are no mysteries about what is wrong with the power sector at the levels of generation and transmission in Pakistan. The faults and deficits are clear to see, have been in the public domain for many years and the solutions to all that ails the power sector are not exactly rocket science either. The faults lie in human failings rather than mechanical breakdowns, and it is political ineptitude coupled with across the board corruption and the serving of the needs of powerful vested interests, which ultimately is responsible for Pakistan periodically switching itself off. The problem is complex and multifaceted but it is fixable if the will to fix it is there — and there’s the rub. Whilst the masses suffer, there are many who benefit from this sorry mess, and they are not about to change their ways and darkness will come again.