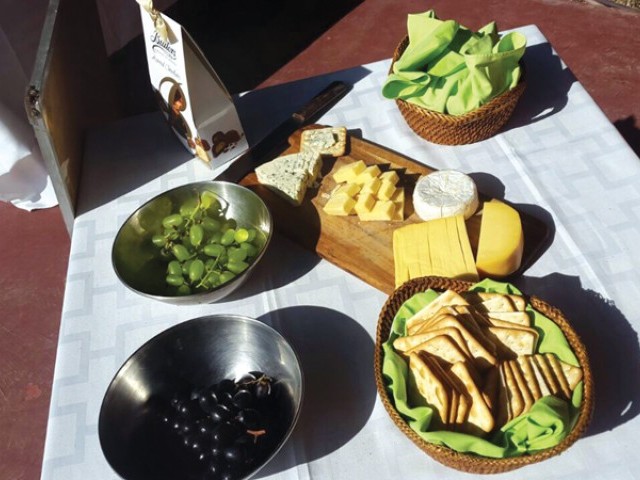 The event will return with a new theme and a new experience for residents next month. PHOTO: EXPRESS

ISLAMABAD: These days, a winter sun and cheesy delights is the height of a Sunday morning in the capital. It was in this light that residents of the twin cities thronged Kuch Khaas for this month’s food bazaar where a cheese-themed event greeted families and friends.

In a traditional manner, the stalls and food stations fringed the lawns of the outlet where the outdoor setting was both inviting and unwinding. People kept coming in shifts, strolling through stations picking their favourite cheesy treat and rolling along.

In addition to cooked snacks, homemade organic cheese by Ciao was also available for sale at the event. Small packs of ricotta di bufala, sour cream, artisanal feta cheese and mozzarella di bufala were sold for those who wanted to take the experience to their own kitchen.

“We wanted people to just come out, enjoy a nice day and indulge in comforting food,” said Bresha Khan, a chef at the Lime Tree Café, while talking to The Express Tribune.

Khan, who has recently joined the café, said when coming up with theme for the month, she knew that cheese was something that would click with many owing to the city’s chilly winters. “One of the first items that we decided to add to today’s menu was French fries with a cheese sauce and from there we went on to adding other cheesy treats such as cheddar cheese-filled samosas,” she said.

To treat the sweet-tooth, red velvet cupcakes and lemon mousse in cups were sold alongside hot chocolate and Apple fizzy drink.

Similarly, Farukh’s quiche and pizza croissant were made with special recipes.

Khan said that the fillings of the croissant included cheese and various sauces with pepperoni. She added that the bite-size quiche, prepared with cheddar, spinach and mushrooms, was a specialty.

The omelette station by Ashir Rayyan Khan was the perfect Sunday brunch option that many were seen rushing towards. From cheeses to chopped veggies spread across the table, Asher would toss the zesty ingredients of your choice on to the pan. There was also the traditional mac and cheese, which was inviting and very palatable.

“We wanted to keep the food light, although its cheesy that is why we are serving smaller portions, so that people indulge in the experience and at the same time don’t feel heavy,” said Khan.

“I think it was a nice day affair. The weather is complimenting the festival,” said Nida Khan, who had come with her friends to the event. “It’s sunny, good food and a great ambiance for a chilled-out Sunday afternoon — just what we needed after a long week,” she said.

Michelle Tania Butt, director of Kuch Khaas said that the food bazaar was a monthly programme, where they were experimenting with various themes related to food which had been a big success.

The event was a day affair, the administration said it would return with a new theme and a new experience for the residents of the twin cities next month.