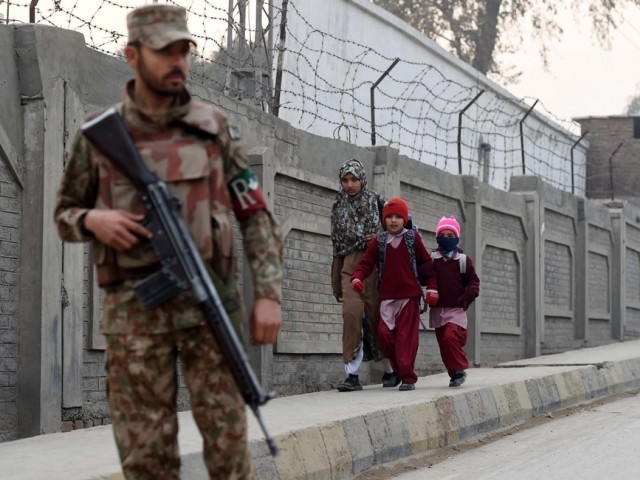 Rs. 2bn have been set aside for the security of the government schools. PHOTO: AFP

Khyber-Pakhtunkhwa Elementary and Secondary Education Department Director Rafiq Khattak on Saturday said only 118 out of the 1,400 government schools in the district have managed to reopen more than a month after the haunting Army Public School (APS) attack.

Talking to The Express Tribune, Khattak said most of the educational institutions were unable to put in place security arrangements and obtain NOCs during the winter break, primarily due to budget constraints.

While security measures are a need of the hour, government schools already lack bare essentials. He said the department has received Rs2 billion for the construction of boundary walls in government schools across the province, while around Rs7 billion is needed for the purpose.

In the aftermath of the APS attack, the government did not just trumpet its reinforced resolve against militancy. The K-P home department issued directives to schools across the province to augment security at their campuses or face action.

The attack has brought K-P’s education sector to a crossroads. With limited funds at its disposal, the government has to raise boundary walls and ensure on-campus facilities in order to avoid an incident similar to the APS tragedy.

Despite assurances, so far private schools have been forced to pay for the arrangements from their own war chests while Rs7.5 billion was announced for construction of boundary walls at government schools on Thursday. According to Khattak, only Rs2 billion has been released while department statistics suggest over 24% of all government schools in K-P are without boundary walls.

Alif Ailaan Provincial Representative Umar Orakzai said the government has decided to utilise the announced amount bit by bit till 2017. He, however, said the released Rs2 billion is expected to fulfil needs until June 30, 2015. Orakzai questioned the insufficient allocation and said once the process of constructing walls is complete, then only will security be evaluated. “Not a bulb can be lit in 46% of K-P’s government schools. How will they power CCTV cameras?” he questioned.