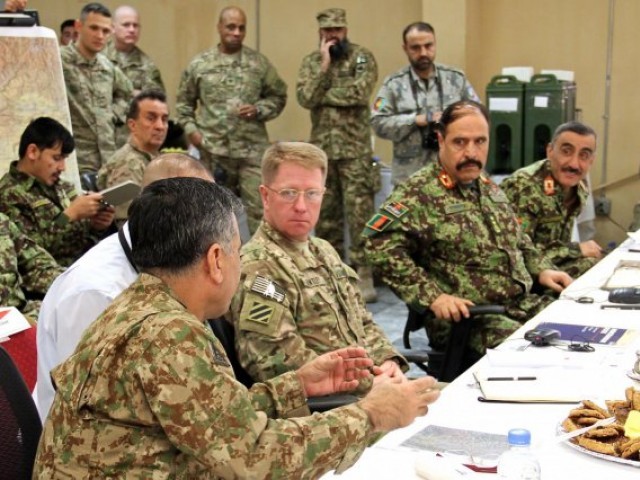 Commanders from Pakistan, Afghanistan and Nato recently decided to improve coordination for complementary operations against terrorists along both sides of the border, Nato said.

“The visits are aimed at enhancing the ongoing Pak-Afghan cooperation and will help boost confidence between the armies of the two countries,” an ISPR press statement said on January 22, 2014.

Members of Pakistan’s Ministry of Foreign Affairs and Afghan Ministry of Defence were also present at the meeting at Kandahar Airfield.

The delegations were hosted by NATO’s Train, Advise, Assist Command, a division that supports the Afghanistan National Security Forces.

Thursday’s meeting followed the first corps commander level meeting earlier in January where it was decided to increase cooperation on operational details and identifying specific terrorist individuals or groups along the border.

At the meeting, Lt Gen Rehman said that if all parties could agree on the agenda of the second meeting, they should be able to discuss the effectiveness of their combined operational plans at their third meeting.

“Today’s meeting laid the foundation for a regional partnership focusing on common security objectives, and a better tomorrow for future generations,” said TAAC Commander US Army Brig Gen Christopher Bentley had said of the meeting.

The commanders had resolved to hold further meetings on improving coordination, Nato said.