Take some time out this year and get to know your provin­ce and the hidden gems it holds.
By Munira Abbas / Creative: Essa Malik
Published: January 24, 2015
Tweet Email 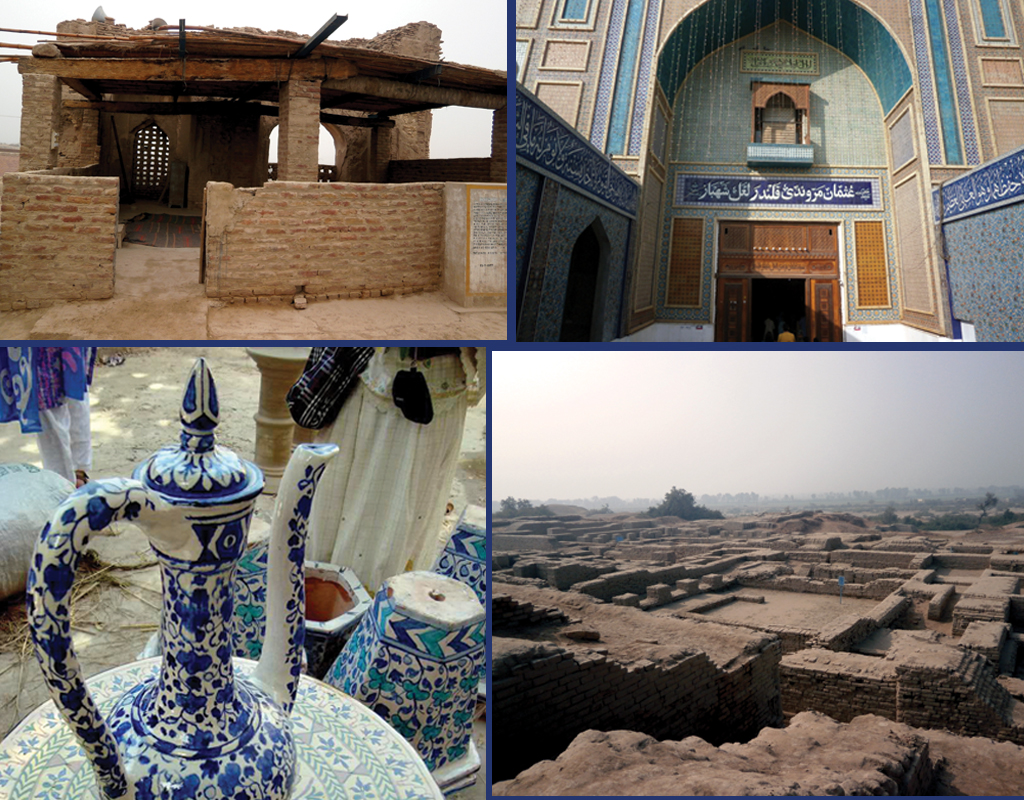 Take some time out this year and get to know your province and the hidden gems it holds.

Sindh has long been forgotten when it comes to tourism. Most residents of the province head to the northern areas when they need a vacation, not realising that Sindh also offers green hills and serene locations. To remove these misconceptions and promote tourism in the province, Indus Resource Centre has started offering tours of Sindh to help people explore its heritage and take ownership of the province.

The five-day tour kicks off from Karachi and takes the group to the calm hills of Ranikot in Jamshoro district. From the mystical trance and peace of the shrines of the red saint and the saint of truth, it takes people to the serenity and quiet of Kot Diji. You can see the mystery of a lone standing rock in the middle of Rohri hills, the myth of the seven sisters, the core of the Indus civilisation in Moen Jo Daro, the soulful loneliness of Sheesh Mahal, the architectural marvel of the suspended bridge in Sukkur, the cultured luxury of Faiz Mahal, the exotic temple under a mountain and the list goes on. Thousands of years worth of old gems waiting to be seen and appreciated.

The best time to take this tour is the four months of near-winter – December to March. The tour takes place twice a month. The entire trip will cost each person roughly Rs25,000 for travelling, accommodation and food, but the price can go down to Rs20,000 per head if you register in groups of four. More details can be found at: http://www.irc-pakistan.com/irc-exploring-heritage.html Ranikot Fort: Also known as The Great Wall of Sindh, the Ranikot Fort, built around the first half of the 19th century, is believed to be the world’s largest fort with a circumference of approximately 26km. The main gate leads to the heart of Ranikot, an inner fort called Mirikot, which served as an administrative centre and a royal residence. The dreamy silhouettes of the hills and a small village inside the fort make it look like a country of its own. Lal Shahbaz Qalandar Shrine – The shrine of Lal Shahbaz Qalandar in Sehwan was built in 1356. The festive green flags of the bazaar leading to the shrine in Sehwan are a perfect peek into the golden dome. Inside the shrine, the aroma of incense mixed with the scent of oil lamps calms one down as the beauty of the Sindhi Kashi tiles, intricate calligraphy and the mirror work overwhelms your senses. i) Sachal Sarmast Shrine – The serenity and quiet of Sachal Sarmast’s shrine in Daraza Sharif is unmatched especially in the evenings. The colourful tiles, the golden flowers and the multiple shades of blue used in delicately patterned tiles are intrinsic of Sindhi culture. You can also listen to the poetry of the saint of truth sung by the devotees.

ii)  Faiz Mahal – This extravagant abode of the Mirs is luxury personified. From the entrance to the courts, which house the heads of antelopes hunted by the Mirs, the keepers have given attention to every detail in each corner of the palace. Faiz Mahal is an ideal place to learn about the history of the Mirs. The palace built in 1798 by Faiz Muhammad Khan I, ruler of Khairpur, is still a residence for the Talpur family. The palace is also famous as ‘Lakhi Bangla’ as it cost the owners Rs100,000 (one lakh) at that time. iii)  Khazana Shop/restaurant- The Khazana Shop known as ‘Landhi’ was built around 180 years ago and was once used as a rest house by the Talpur royal family, every time they visited the city from their nearby castle of Kot Diji. It was later converted into a storage facility by them until the Indus Resource Centre restored it and turned it into a sitting and shopping area.

iv)  Shah Abdul Latif Bhitai University – The university is home to a herbarium and botanical garden complex, which is home to a large number of species of plants.

v) Shrine of Hazrat Uban Shah – Situated on a mound, this shrine is a mystery waiting to be unravelled. The residents are not sure who the saint was or his origins but they still frequent the shrine to follow the footsteps of their ancestors. The bazaar leading to the shrine is made on a slope, which gives it an even more exotic feel.

i) Muhammad Bin Qasim Mosque – Showing only traces of a few old, deep-blue tiles on one of the arches, the structure of Bin Qasim’s mosque still stands tall on top of a mound. The mosque has a small space designated for praying and a space to perform ablution under the shade of palm trees. ii) Kalka Devi Mandir – Kalka Devi’s Mandir is situated inside a mountain cave where the goddess is believed to have made an appearance. The temple is believed to have tunnels that connect it to the temple in Hinglaj, Balochistan. The hills surrounding the area are now at the mercy of construction companies who crush the stones to make money. According to the caretaker of the temple, 60 per cent of people who visit this temple are Muslims or belong to other religions, apart from Hinduism.

This mysterious rock with a mosque at the top can be a challenging climb for many. There are several myths surrounding this rock formation but none of them have been verified. According to one of the legends, a Muslim warrior cut the rock into four pieces using it as a shield to win a battle against Kalka Devi, whose mandir is not far from this rock. At the foot of Chattan Shah ji Takri, lies a 10-foot-long grave. Locals believe that the grave belongs to the same warrior who cut the rock into four halves. The shrine of the seven sisters in Rohri stands on the bank of River Indus. The myth involves seven Arab princesses, who were camping in the cave when Raja Dahir’s drunken soldiers – some legends claim it was Raja Dahir himself – attacked them. They prayed to God to protect their honour and, so, the ground under their feet swallowed them alive. Only female visitors are allowed to see the actual graves of the sisters, which are inside the bat-infested cave, but there are other graves located on top of the hill. Sukkur Barrage is truly the pride of Pakistan’s irrigation system build at an estimated cost of Rs200 million. The barrage museum has archived all the photographs of the landmark from its inception till the present day, including engineering books and government records from the British era. When you take a boat ride on River Indus in Sukkur, the first stop is a small island of Sat or Sadh Bela. Sadh Bela, the sage of the jungle, came here from Nepal in 1823 and started preaching here. The temple is made from Malagori marble from Jaipur, Rajasthan, that keeps it cool in hot weather. Downstream the same river is another small island where a golden tree stands, offering shade to the tomb of the river saint, Khwaja Khizr. The tomb was built approximately in 925 AD, for Khwaja Khizr, known also as ‘Jinda’ or ‘Living Pir’.

The red-brick minaret of Masoom Shah is situated in the centre of Sukkur city. It was built by Masoom Shah, the governor of Mughal Emperor Akbar in the 18th century. There is a myth that the stones used on the stairs were soaked in real ghee for 84 days which is why they are soft and cool to walk on. A total of 84 narrow steps take you right to the top of the minar from where you can get a view of the entire city. It may be slightly harder for people suffering from claustrophobia as the stairs are narrow with few windows letting sunlight in.

The Shahi Sheesh Mahal stands in all its splendour with the finest work of floral patterns painted on the walls and ceilings, and reflective material on the pillars. Preserved by the Mirs of Khairpur since 1790 as a wildlife reserve, Mehrano is home to nearly 2,000 animals, such as the blackbuck, hog deer, wild boar, and resident and migratory birds from Siberia. A small room is reserved for tourists to see the ferocious black boars, which are called upon in a unique way by the caretaker, who wears an orange Russian cap. The wild boars and the dogs are also made to fight as a sport. The reserve shares its boundary with the Cholistan desert and it nothing short of a scene from National Geographic with green pastures on one side and sandy desert on the other.

Kot Diji claimed to be the unconquerable fort but this claim was never verified since it was never attacked. Built in the 18th century, Kot Diji Fort was built by Mir Sohrab Khan Talpur to provide protection against an Afghan invasion.

The Khajoor Baghs filled with palm trees are unique to Sindh, with more than 300 varieties of dates found in Khairpur alone. The centre of Indus Valley civilisation, Moen Jo Daro’s 5,000-year-old secret was first revealed in 1911. Its old baths, temples, factories and the drainage system, are enough to put our present municipal systems to shame. It is believed that only 10 per cent of the structure has been excavated, the rest still buried under ground. Home to the ancestral graveyard of the Bhutto clan, Garhi Khuda Bakhsh has 13 gates. The area of this mausoleum is larger than any other shrine in Sindh.

At the end of the five-day tour, Hala offers some retail therapy for the tourists. Items ranging from patterned blue pottery and tiles, to the Soosi cloth and Loi shawls, can all be bought at Hala’s bazaars. The ethereal music playing at the shrine of Shah Abdul Latif Bhitai is a perfect wrap up for this journey around Sindh. The saint rests peacefully in his grave under the white dome, where his devotees are gathered at all times.