For once : Sehat ka Ittehad brings PTI, PML-N, army on one page

For once : Sehat ka Ittehad brings PTI, PML-N, army on one page 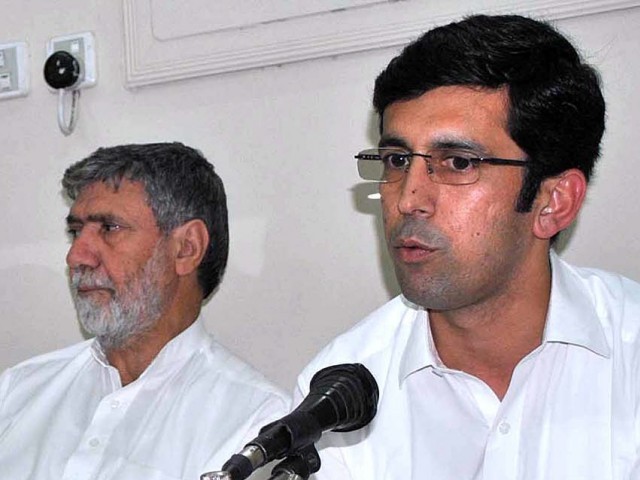 “The joint venture between both the governments has been named ‘Sehat ka Ittehad’ and will counter nine diseases,” Tarakai told The Express Tribune on Thursday. The idea was discussed between Chief Minister Pervez Khattak and Pakistan Tehreek-e-Insaf (PTI) chairman Imran Khan a month ago, he said.

A meeting of the apex committee—formed to implement the National Action Plan at the provincial level—was held in Peshawar on Thursday, attended by Governor Sardar Mehtab Abbasi, Khattak and Corps Commander Peshawar Lieutenant General Hidayatur Rehman. Participants discussed the strategy to counter the diseases in detail. These are diptheria, tetanus, tuberculosis, pertussis, polio, meningitis, hepatitis B, influenza and measles.

Representatives from the armed forces, governor house (additional chief secretary Fata) and the provincial government will work together to fight these nine vaccine preventable diseases, said the health minister. “If extensive campaigns are held in the tribal areas as well as K-P, we think we will overcome the problem,” said Tarakai. “Sehat ka Ittehad is in its initial stages and things will be finalized in a week or less.”

According to Tarakai, 300 camps will be set up for the campaign which will kick off in the first week of February. At least 3.3 million children will be vaccinated across the province in one day.

A senior PTI official requesting anonymity said after the decision of the apex committee, a new vaccination schedule will be followed instead of the previous federal schedule.

Four agencies of the Federally Administered Tribal Areas and 10 K-P districts will be covered as one block, he said. These include five central and five southern districts, which touch the boundaries of Khyber, North and South Waziristan agencies. “These 14 areas constitute about 88% of the global polio cases—248 out of 303 cases are from these areas,” said the official who has worked on both Insaf and Ittehad campaigns.

When asked about access to the tribal belt, the official said, “Access will not be an issue as IDPs will be going back soon.”

The idea was conceived by PTI, he said, and was put forward soon after the tragedy at Army Public School in Peshawar. “Imran Khan met health experts on December 17, and at the apex meeting held soon after, Chief Minister Khattak approached the governor and chief of army staff.”

Sehat ka Ittehad will be a non-political project; “We hope the Centre and Pakistan Muslim League-Nawaz will set politics aside and work together for a healthy Pakistan,” said the official.

However, sources told The Express Tribune there were some initial rumours the federal government would not be able to provide as many vaccines as are required. “If the campaign has the blessing of the army, the prime minister and has been approved at the highest forum, the non-availability of vaccines would be unacceptable,” said the PTI official. Fresh funding is not required for the programme; it will be taken from previously acquired loans for health campaigns, he added.

Health officials said a coalition between the federal and provincial governments was necessary to stem the spread and eradicate preventable diseases. “It is said the increase in cases of measles and polio was caused by migration from the tribal areas due to ongoing operations against militants,” said one health official.