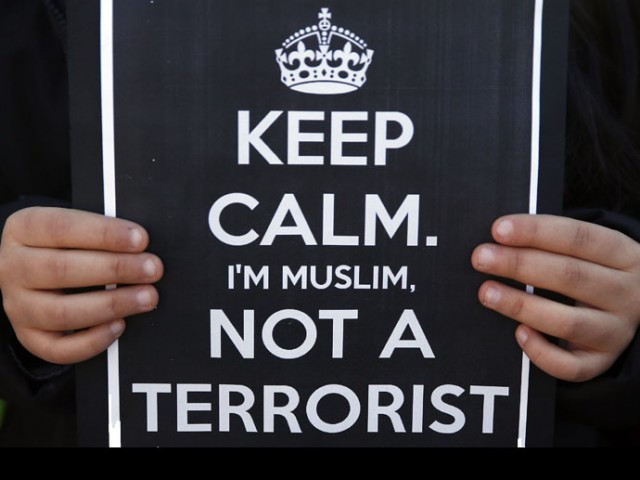 A young Pakistani, Shehzad Ghias, has penned a fitting apology for an attack on satirical magazine Charlie Hebdo for people world over from Muslims. Enough said, here it is:

“After the tragic Charlie Hebdo shootings, there has been a call by some people to make all Muslims all over the world apologise for the incident. I completely agree with the sentiment. It is the only way to root out terrorism for once and for all.

Nothing could make all the victims of terrorist attacks all over the world happier than watching every single Muslim in the world say ‘sorry.’ To really drive the point home, we can even send them greeting cards with our heartfelt apologies.

I am sure the world would reciprocate in kind. We can start an apology trend. Once every single Muslim in the world apologises for Charlie Hebdo then we can move on to making every single Christian in the world apologise for Hitler. Hitler’s moustache is for the Christians what an unkempt beard is for the Muslims. I have no idea why mass murderers are so keen on making fashion statements too.

The British can fly all Brits to all their previous colonies and make them all apologise to every single member of those countries. It might be much harder for the Americans to do the same considering the amount of things they have to apologise for. They can make a world tour out of it: Syria, Iraq, Afghanistan, Pakistan, Iran, Vietnam, Palestine, Cuba, Mexico, Spain, England. At this stage it is easier to just name the countries America does not need to apologise for.

‘Sorry’ should be the first word we should teach all future Muslim kids. We should roam around wearing shirts which say ‘sorry’, better yet maybe even permanently tattoo ‘sorry’ on our foreheads.

I personally feel responsible for every single person of my faith who does anything. While I am at it, I want to say sorry to every person who got his slippers stolen at the masjid (mosque) but if and only if you can confirm that the person who stole your slipper was a Muslim. He must have been shouting ‘Allah o Akbar’ while stealing them for you to be sure.

I now fully comprehend why our justice system has such a huge bottleneck of cases. If every single Muslim is responsible for every single thing done by any Muslim, I do not blame the judges for all the delays. The entire Muslim population of the world has to be included as defendants in every case.

I hope Pakistan’s military courts are much more effective. I hope they can follow the efficient model of North Korea, who use the ‘three generations of punishment’ rule. It is the only way to ensure the collective responsibility for one’s actions. Clearly if a person commits a crime, then people who brought that person into the world must be guilty too. And any person a criminal brings to the world is obviously a criminal too.

Every single Muslim that is yet to be born should be brought up being taught to apologise for everything. Why just limit it to Charlie Hebdo? Muslims should apologise for all the ills caused by Muslims to the world.

To make life easier for all parents, I am drafting a generic apology that they can make their kids memorise.

“My name is (Insert Islamically acceptable name here) and I was born into a Muslim family so that makes me guilty of all the things Muslims have ever done. Before you put me in Guantanamo Bay, I just want to say I am deeply sorry.

I would like to apologise for inventing astronomy. The guilt of al Sufi naming all the visible stars in the 10th century and Abu Mahmud Khojandi calculating the tilt of the Earth’s axis in 994 AD is something that I still carry with me. It was because if their crimes against humanity that these terrorists are able to accurately calculate the dates for their attacks.

I would like to apologise for Ibn al Haytham’s contribution to optical science. Had he not discovered all human beings actually see, how would these terrorists be able to see who they were killing? Clearly these Muslim terrorist organisations have been active since the 10th century. Had al Haytham not figured out that light travels in straight lines, we would not have the cameras of today that terrorists use to promote their organisations. Al Haytham was basically the first member of ISIS.

I would like to apologise for al Jazari’s water-raising machines, his use of cranks to push water up helped agriculture and in turn fed all these terrorists: While I am on the subject, sorry about creating hospitals too. They are just a needless obstacle in the way of killing terrorists. I have no idea what 10th century Muslim civilisations were thinking providing free 24-hour universal health care to people. At least I am happy they were self-conscious of this insanity and also created the first hospitals for the mentally ill in the world.

The use of the Al Jazari’s ideas lead to the creation of the bicycle giving the world the horrible form of terrorism called the Tour de France. If watching grown men cycling across a country wearing yellow jerseys is not torture, I do not know what is.

I would like to apologise for the invention of windmills, guitars, the hookah and coffee.

I would like to apologise for the role of Muhammad Ibn Musa al Khwarizmi in the development of algebra and algorithms. If he was alive, I am sure he would be selected for a random spot check in an airport relying on his work for their daily calculations.

I would like to apologise for al Jahiz’s theory of the ‘struggle for existence’. I am sorry for even mentioning it. I realise it is completely contrary to the Science and Islam binary narrative perpetuated freely by networks such as Fox News. How dare I mention that the theory of natural selection actually has roots in a 9th century book of animals called Kitab al Hayawan.

I would like to apologise for the University of Al Karaouine, recognised as the world’s oldest university that granted degrees to individuals, way back in 859. I am sure they were just handing out degrees in terrorism anyway.

Sorry about the Caliph Harun al Rashid founding the House of Wisdom in the 9th century. It was his ill intentions that led to the west being exposed to the works of the Greek philosophers. If it wasn’t for him kids in the west would not be terrorised by the works of Socrates, Plato and Aristotle throughout their school lives. I feel their pain.

Sorry for all the art also. And the architecture. All the mosques were meant to be terrorist headquarters anyway so I am glad you took all the inspiration from them and took the techniques out of the religious context. I am not even interested in anything that happened before the Renaissance in Europe. If you tell me it happened out of nowhere then I have no need to trace the traditions back anyway. It is not like things happen in a historical context relying on all the traditions gone by.

I sound like a crazy person even attempting to compare Andy Warhol’s techniques to the repetition of patterns and pictures prevalent in mosques and Islamic architecture so I am going to shut up about it. We all know Muslims hate art anyway.

Trying to read calligraphy is also terrorism, so sorry about that too.

Lastly, I would also like to apologise for the Arabs discovering how to distil water and create alcohol out of fermented fruits. All the Muslims should definitely apologise for all the drunk driving accidents caused around the world

I could go on but I think you realise how sorry I am about everything. I hope you would be able to accept me as one of your own in a way that would make you feel that you are celebrating diversity but in reality you are promoting uniformity. Thank you for letting me retain my token identity while robbing me of my historical traditions. I hope all the future Muslim generations never get to learn about those traditions so that they find it much easier than me to simply associate all things Islam with merely terrorism. It would make it easier to apologise for them.

(English name I have taken up to make you like me more.)”

The letter first appeared on the writer’s blog. This article is satire.

CORRECTION: A previous version of the article stated that the apology first appeared on Scroll.