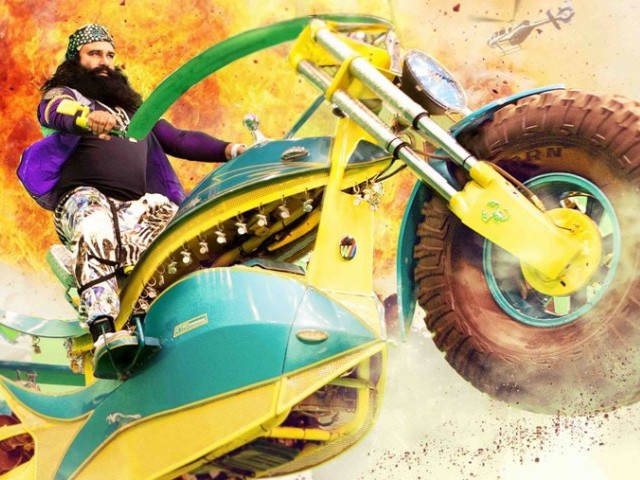 NEW DELHI: An Indian film that features a self-styled spiritual leader in jewel-studded costume riding motorbikes and sending the bad guys flying has prompted the chief of the country’s censor panel to quit, citing government interference.

Other members of the panel were expected to quit on Friday, in support of Leela Samson’s resignation after an appeals tribunal reversed censors’ decision to keep the film, MSG: The Messenger of God, out of theaters as being too promotional.

“There is interference, there is coercion,” Samson told CNN-IBN, adding that the appeals tribunal, whose decisions usually take a month, had cleared MSG within 24 hours. However, the government, which runs the censorship and appeals process, did not interfere, said Rajyavardhan Rathore, India’s junior minister for information and broadcasting.

“If they had to give it a certificate and overrule us, why have a board in place?” Samson said. Another panel member, Ira Bhaskar, said she would resign later on Friday in support of Samson, with others to follow. “This is not an environment in which we can function as a board,” she told CNN-IBN.

The imbroglio has delayed the release of MSG, which stars Gurmeet Ram Rahim Singh, the 47-year-old leader of the Dera Sacha Sauda sect, beyond its originally set date of Friday. But far from being unsuitable, say the film-makers, MSG fights alcoholism and drug addiction, and extols the virtues of celibacy and a vegetarian diet.

“My film does not talk about religion nor mention any religion,” Ram Rahim Singh told a news conference on the outskirts of the capital, New Delhi. Singh said he was bemused by the fuss over MSG, but did not give any reason for calling off a hastily arranged premiere. It was unclear when the film would open in cinemas.

The debate over the film went viral on social media, with hashtags #MSGinCinemas and #WeLoveMSG trending on Twitter. “All hail freedom of expression. MSG … is India’s Charlie Hebdo,” said Twitter user “Finger of India”, referring to the French satirical newspaper attacked by Islamist gunmen this month.

The movie’s trailer, which has racked up more than 2 million views on YouTube, shows Ram Rahim Singh, complete with flowing beard and hairy outstretched arms, glaring at evildoers before scattering them with his fists. Mobbed by thousands of doting disciples, he struts and sings like a Bollywood hero.

Singh wrote and co-directed the film, besides singing and composing its music.

A sequel is in the works with profits earmarked to fund a hospital and HIV research center, said Aditya Insaan, a spokesman for the film’s distributor, Hakikat Entertainment. Even apart from the celluloid derring-do, Singh is a controversial figure.

In December, a court asked federal police to investigate claims that Singh forced 400 followers to undergo castrations at his ashram in northern India, in order to experience God. Singh has denied the allegations, but India’s Central Bureau of Investigation has filed a case.

Several groups representing the Sikh minority that makes up 2 percent of India’s population of 1.2 billion have demanded a ban on the film, in which they say Singh distorted their scriptures and dressed up as a 17th-century Sikh guru.

“We are not against freedom of expression, but the organisation against Sikhism,” said S Simranjit Singh Mann, the chief of one such group. In New Delhi, about a hundred Sikhs held a protest march near Parliament. They carried placards and shouted slogans against Ram Rahim Singh. In the town of Hisar, about 150 kilometers (93 miles) west of the capital, protesters burnt an effigy of the leader.

SRK to feature in a graphic novel