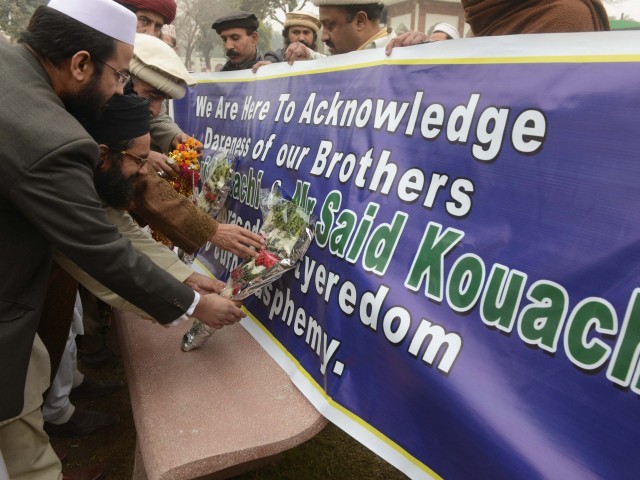 People place bouquets in front of a banner bearing the names of the two killed assailants who attacked French satirical weekly Charlie Hebdo, in Peshawar on January 13, 2015. PHOTO: AFP

PESHAWAR: While last week’s attack on French satirical magazine Charlie Hebdo sparked global outrage, dozens of people in Peshawar paid tribute on Tuesday to the brothers who carried out the murders.

Though small in scale, the event was indicative of the anger that portrayals of the Prophet Mohammed (PBUH) can ignite in some parts of the world, particularly in Pakistan where tough blasphemy laws make insulting the Prophet (PBUH) a crime punishable by death.

Local cleric Maulana Pir Mohammad Chishti led some 60 people in prayers for Cherif and Said Kouachi, who shot dead 12 people at the magazine’s offices on January 7, as worshippers called the pair “martyrs”.

“These two brothers have paid the debt of all Muslims in the world and we present them our salute and respect,” Chishti said.

Aurangzeb Alhafi, professor of Islamic Studies at Punjab University in the eastern city of Lahore said he attended the prayers as a religious duty.

“If freedom of expression stops at the mention of the Holocaust, then it should also stop at the honour of our Prophet (PBUH),” Alhafi told AFP.

Fourteen people are languishing on death row in the country for falling prey to its blasphemy laws, which rights groups say are used to persecute minorities and wage personal vendettas.

Mobs often take matters in their own hands and lynch those accused of blasphemy, and such killers are widely feted.

Charlie Hebdo meanwhile has announced it will defy the attackers by putting a cartoon of a weeping Prophet Mohammed (PBUH) on its next cover.