Govt will have to face extrao­rdinar­y expend­itures due to implem­entati­on of Nation­al Action Plan on terror­ism, says Dar
By Web Desk
Published: January 12, 2015
Tweet Email 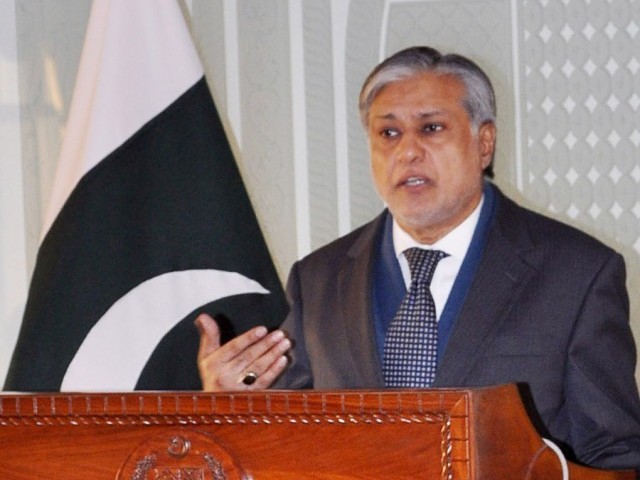 ISLAMABAD: Finance Minister Ishaq Dar on Monday said the foreign exchange reserves of the country have crossed over $15 billion as a result of the government’s prudent policies, Radio Pakistan.

“The government is committed to achieve all economic targets,” the finance minister said while addressing a press conference in Islamabad.

“The International Monetary Fund (IMF) has completed five reviews on Pakistan’s economy, and we are ready for the sixth review – which is expected to be held in the last week of this month,” he added.

He said the IMF has projected a 4.3% GDP growth for the country.

“It is our utmost effort to achieve the target of 5.1%, despite the setbacks caused by flash floods and expenditures on the war on terrorism,” Dar said.

Further, he said the GST on oil products has been increased from 17% to 22% to achieve revenue shortfall because of the reduction in oil prices in the global market.

“There is a revenue loss of $68 billion, and the government will recover Rs17.5 billion till June 30 due to an increase in the GST on petroleum products,” he said.

Dar further said that the Federal Bureau of Revenue (FBR) collected Rs1,162.4 billion in the first six months of the financial year, as compared to Rs1,031.4 billion during the same period last year – therefore showing a 13% increase.

The finance minister said the budget deficit remained at 2.4% in the first six months of the current fiscal year against the target of 4.9%.

“The government will have to face extraordinary expenditures due to the implementation of the National Action Plan (NAP) on terrorism, as well as the rehabilitation of temporary displaced persons (TDPs),” Dar said.

He assured that all possible resources will be provided for the honourable return of displaced families to their homes.

Dar also said that home remittances have increased by 15.25%, while exports stand at Rs12.07 billion.  He said imports of the country have increased from $21.671 billion to $24.203 dollars in the first six months of the current financial year – which showed an increase of 11.68%.

The finance minister said inflation last year was 8.9% in the July-December period, which decreased to 6.1% in the same period this year.