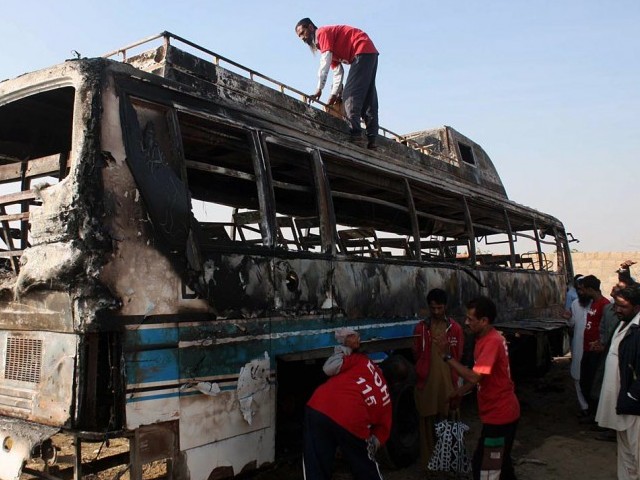 KARACHI: Police, on behalf of the state, registered FIRs on Monday afternoon against both the drivers and owners of the vehicles that crashed into each other at Karachi’s Super Highway.

The FIR was registered at the Memon Goth police station under sections 279, 337 and 320 of the penal law.

Earlier, a victim’s body was also identified at the Edhi’s Sohrab Goth’s morgue.

According to the Edhi sources, his body was the first one – out of the 62 – to be identified after being shifted to the morgue from Jinnah Postgraduate Medical Centre (JPMC).

On January 11, at least 62 people were killed in a horrific collision between an oil tanker and a passenger bus that occurred on the 17 kilometre-long Kathore link road which connects the Super Highway with National Highway.

The passengers were heading to their hometowns from different localities of Karachi’s Malir district with most of the victims belonging to Shikarpur, Khairpur and Sukkur.

The initial investigations had faulted the oil tanker for the accident, as the vehicle came from the wrong side of the road and rammed into the bus.

A number of four passengers sitting on the roof of the bus, however, escaped death by jumping off the vehicle just as it hit the tanker.

It was unclear whether the drivers and cleaners of the oil tanker and the bus survived Sunday’s crash or not.

Malir district police chief SSP Rao Anwar told The Express Tribune, “It seems that the drivers and cleaners of the bus and tanker managed to escape. We are trying to trace their owners”.

“Dozens of passengers were trapped inside the bus when its exits caught fire or were blocked,” he also said.

The collision was the second crash involving major loss of life in the province of Sindh in less than three months.