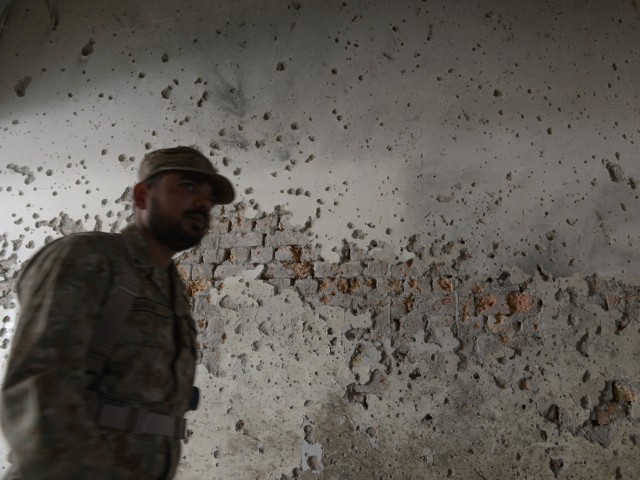 An army soldier walks past a bullet-riddled wall at the Army Public School in Peshawar on December 17, 2014. PHOTO: AFP

PESHAWAR / KARACHI: On December 16, 2014 schoolchildren who were yet to outgrow childhood fantasies were exposed to the most brazen act of terror, the scars of which might never heal.

In the wake of the barbaric Army Public School attack, the need for mental rehabilitation facilities for children and adolescents has been strongly felt.

To help children deal with the ordeal, the Khyber-Pakhtunkhwa (K-P) government has decided to establish a Child Trauma Centre in the province even though it lacks adequate resources and there is a lamentable dearth of experts in the field.

The facility will be set up at Lady Reading Hospital’s (LRH) psychiatry department. Ward head Dr Mian Mukhtar told The Express Tribune a helpline has already been established through which people can reach out to experts. He said the facility will have two sections and one will offer psychiatric help. “We will set up four pockets across the city on Warsak Road, University Road, Gulbahar and Civil Quarters,” he added.

While underscoring the hurdles associated with treatment procedures, Dr Mukhtar said doctors will visit children at their homes if they are unwilling to head to the centre.

“Dr Shakeel and Dr Waqar Mohmand from the United States and a female doctor from Colchester, United Kingdom have voluntarily reached Pakistan in order to rehabilitate the children and parents traumatised by the APS attack,” he said, adding Dr Lubna will also arrive from the US on February 16.

In order to make up for the dearth of mental health professionals, Dr Mukhtar said over 90 doctors have been trained so far in child psychiatry. The centre will train more psychiatrists, he maintained.

“We have to make up for the lack of human resource in the area and impart training to more and more people,” he said. “As far as I know there are only a few child psychiatrists in the country,” he complained blaming the lack of attention at state level and the exclusion of child psychology in the syllabi of varsities.

A paper published in the Journal of the College of Physicians and Surgeons Pakistan in 2013 also laments the lack of mental health professionals in the country. “The enigma of child mental health is as obscure as mental health in general. Child and adolescent psychiatrists make for 0.01% of the general adult psychiatrist [population]. If an estimate is to be made for the [child] population to child psychiatrist ratio then it would come abysmally low,” it states.

While talking to The Express Tribune, University of Karachi (UoK) Department of Psychology Chairperson Dr Anila Amber Malik said psychological treatment will be more effective as compared to psychiatric treatment because medicine does not prevent relapse. Instead the victims need to develop coping capabilities to overcome the post-traumatic stress. “Developmental psychology that deals with both children and adolescents is taught at all major varsities. Psychologists, remedial teachers and speech therapists can entwine rehabilitation procedures that will benefit victims in the long run,” she said.