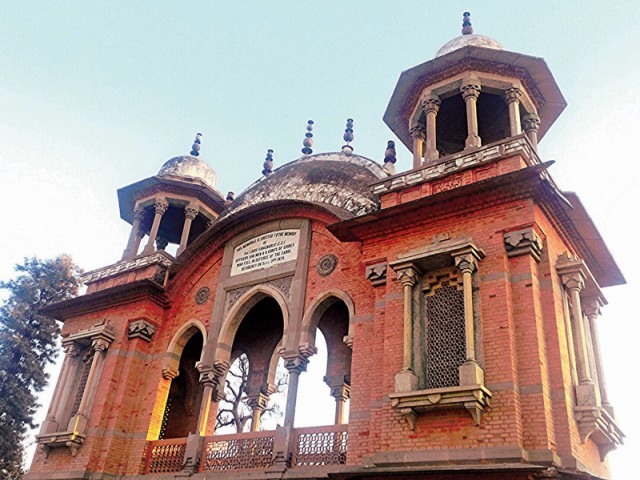 The Guides Memorial was erected in 1892 in memory of the 71 Guides Cavalry and Infantry. PHOTOS: HIDAYAT KHAN/EXPRESS

MARDAN: This is part of a longer inscription at the Guides Memorial, in the heart of Mardan, which was erected in 1892 in memory of the 71 Guides Cavalry and Guides Infantry who fell after a seven to 12-hour resistance against hundreds of Afghan soldiers on September 3, 1879.

“The memorial’s job is to tell the story of Britain and its [colonial] war with Afghanistan,” Salim Shah, a retired officer of the Guides, told The Express Tribune. Shah is still considered to be a guide, but of the memorial. “The guides which had both the cavalry and infantry were incorporated into the Pakistan Army after the creation of Pakistan and I am proud to have served in it,” added Shah.

The story of the Battle of Kabul 1879 or the Second Anglo-Afghan War started when Russia sent uninvited envoys to Afghanistan in 1878, prompting the British ruler’s counter refrain, asking Afghan ruler Sher Ali Khan to accept a British mission as well. The mission was turned down, yet the Empire—not used to accepting no for an answer—sent in its military. Sher Khan’s successor King Yaqub Khan was eventually cornered into accommodating the terms of the British Government of India, including their presence in Kabul.

The British mission led by Sir Pierre Louis Napoleon Cavagnari and his escort, the Corps of Guides under the command of Lieutenant Walter Richard Pollock Hamilton, arrived in May 1879. The mission was given residence in Bala Hissar Fort in Kabul and was inevitably attacked on September 3, 1879 by a disgruntled regiment of the Afghan king’s army.

Hundreds of Afghan soldiers stormed the residence with the help of similarly irate civilians, it is said on several history websites. Cavagnari was soon severely wounded and had to be left behind as buildings were set on fire. Hamilton and his Guides made several efforts to take back Bala Hissar, even going on the offensive with just a handful of sepoys. Even after Cavagnari, Hamilton and Surgeon Ambrose Kelly were killed, the remaining Guides fought to their death, rejecting the Afghans numerous offers to surrender. The Guides Memorial was erected in 1892 in memory of the 71 Guides Cavalry and Infantry. PHOTOS: HIDAYAT KHAN/EXPRESS

All those killed were awarded the Indian Order of Merit, at the time the highest award available to Indian soldiers.

The condition of the memorial

The memorial continues to deteriorate, its poor upkeep evident in the discoloration and anachronistic choice of construction material used to patch bits and pieces of the structure. In 2005, the district administration built a road right in front of the memorial. After much pressure, including some from the British government, the road was removed and in its place two cupolas, much in the style of Islamic architecture, were constructed on either side of the memorial.

“[The memorial] is an honest recognition of the sacrifices of the Guides during the deadly assault on the Kabul residency,” said Shah.

It is about 70 feet high and there are staircases on both sides of the arch for access. According to the guide, the structure is a combination of Hindu, Islamic and British architecture. Some consider the style to fall under ‘Indo-Gothic’.

The reason to place the monument in Mardan is explained in The Story of Guides by Colonel George John Young Husband. The Corps of Guides was formed in 1846 in Peshawar, however, it became an established force when it became the garrison of Mardan in 1851.

“The Hoti-Mardan fort not only became the home of Guides but also the symbol of British power on the wild border of Yaghistan, the land of lasting conflicts and unending vendettas,” wrote Husband, who also served in the cavalry. “The position was chosen within striking distance of all centres of disturbance.”

In a typical throwback to Mughal architecture, the memorial faces a pool meant to showcase its reflection. The pool used to be fed by a nearby irrigation canal. One of the two cupolas constructed after 2005.  PHOTOS: HIDAYAT KHAN/EXPRESS

A marble slab inscribed in Pashto reads, “This pool, the water of which is like the spring of Aab-e-Hayat, is in memory of those brave swordsmen, who in the leadership of Cavagnari sacrificed their lives in 1879 in defence of the British residence in Kabul whose name would be remembered in this mortal world till the Day of Judgment.”

Visitors today will find no water in it, whatever water can be sourced is too polluted to use.

“Last year we tried to release water in the pool but the dirt and other pollutants which came in set us up for failure,” said Shah. Muhammad Usman, an archaeologist, told The Express Tribune the two cannons at the main gates are also from the British era, used by the Empire’s forces to “tame local Pukhtuns who resisted British invasion”. He confirmed most of the reconstruction work done on the memorial was not even undertaken by archaeologists, but contractors, steadily chipping away at the monuments historical value.

“They have destroyed the basic structure of the monument,” said the archaeologist. “The structure of Islamic cupolas, constructed by the cantonment board, is out of place,” he said. “Some of history has already vanished … this is our heritage we are talking about, it would be better if the site is handed over to the archaeology directorate instead of the cantonment board which [has] ruined it already.”