Operation Zarb-e-Azb: US declines to commit aid for displaced persons

Operation Zarb-e-Azb: US declines to commit aid for displaced persons 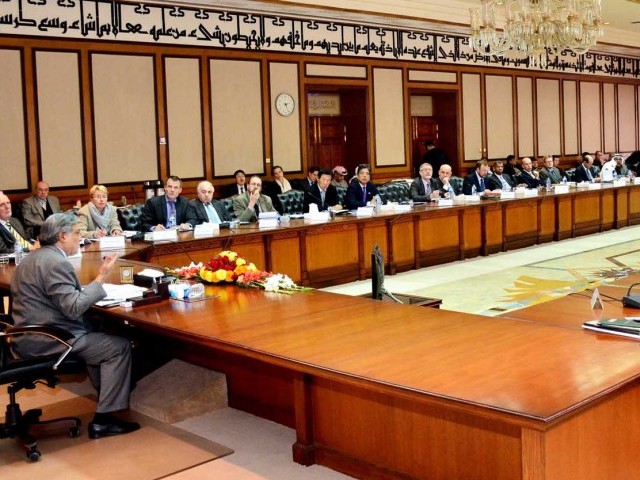 In what appears to be the result of sustained diplomatic pressure from India, the United States on Friday declined to commit any funds to help refugees affected by Operation Zarb-e-Azb, resulting in the failure of the third Donors’ Conference to raise the target $380 million needed to fund the government’s return and rehabilitation program.

In the eyes of the finance ministry, the biggest setback came from the United States that did not commit any funds at the conference held at the PM House. US Ambassador to Pakistan Richard Olson was expected to announce $250 million for internally displaced persons (IDPs). That expected announcement was also one of the main reasons behind holding the third Donors Conference, said a senior finance ministry official.

After the launch of Operation Zarb-e-Azb, an action the US government had been persistently asking Islamabad to undertake, the government has held conferences with foreign governments and aid agencies to try to raise money to help the people of the tribal regions displaced by the military’s actions against the Taliban.

But when Olson did not make any commitments on behalf of Washington, the conference effectively collapsed, leaving Finance Minister Ishaq Dar disturbed and questioning the very rationale for calling the meeting in the first place. In his last meeting with Dar, Olson had told the finance minister that the US would disburse $532 million to Pakistan under the Kerry-Lugar assistance package, of which $250 million would be for the IDPs, according to one finance ministry official.

In recent days, however, the United States has come under sustained diplomatic pressure from India over its financial assistance to Pakistan. New Delhi wants the US to stop all aid to Pakistan until terrorists it accuses of having masterminded attacks on Indian soil are caught and punished. A US embassy official claimed that the US had provided approximately $100 million for the IDPs, but a finance ministry official contradicted that account, saying that the numbers quoted by the US officials were amounts pledged in the past and related to wheat procurement and processing.

The setback comes at a time when the Pakistan Army has announced that it will be safe for the IDPs to return to their homes starting in February. The government has been scrambling to find the funds for the return and rehabilitation program ahead of that deadline. While the finance ministry has so far disbursed Rs30 billion for Operation Zarb-e-Azb, the government has been resorting to desperate measures to raise more revenue, including raising the sales tax on petrol from 17% to 22%.

More than 300,000 families have been displaced from their homes in the tribal areas, mostly from North Waziristan. The Pakistan Army estimates that there has been significant damage as a result of the military operation against the Taliban, with 47% of the infrastructure in Waziristan estimated to have been completely destroyed and even much of the remaining 53% being badly damaged. Miranshah and Mir Ali are among the worst affected towns.

The only decision taken at the third Donors Conference was an agreement on using the ‘Support and Management Secretariat’ of the Engineers Division of the army as the central secretariat for rehabilitation of the IDPs and spending on infrastructure projects. The donors will also coordinate with Fata Secretariat for implementation of the projects.