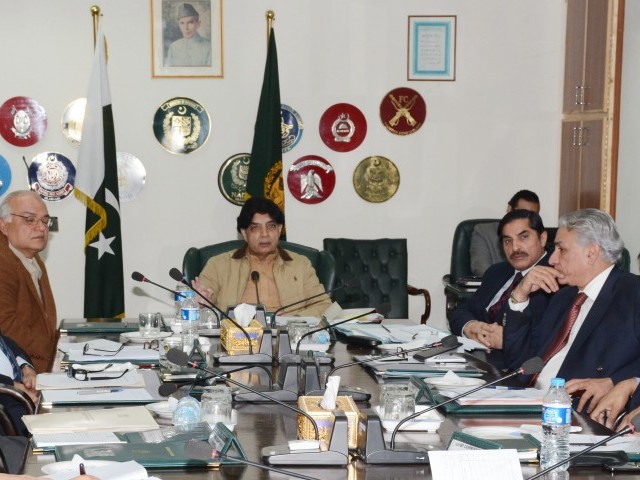 Interior ministry said that a comprehensive analysis is under way to identify how many of the proscribed groups are active inside or outside the country. PHOTO: PID

As part of its National Action Plan to defeat terrorism, the government is going to launch a crackdown on proscribed organisations and will also be asking ‘brotherly’ Muslim countries to clamp down on financers of sectarian and terrorist networks operating in Pakistan.

According to an official of the National Counter-Terrorism Authority (Nacta), a group of experts has already recommended to the NAP committee that Iran, Saudi Arabia, and the United Arab Emirates should be asked to stop funding the religious groups banned in Pakistan.

“The roots of extremism in Pakistan have often been traced to groups operating in a neighbouring country on the western border as well as in countries with large Pakistani Diasporas such as Gulf states,” he said while quoting the recommendations of the experts to the committee.

“Around 11 proscribed organisations have links with international terrorist groups while others are operating from within the country,” he said.

According to the Nacta official, who attended Friday’s important meeting on the NAP implementation, a civil-military operation is being launched against the banned outfits. “The Islamic State, or Daish, is the latest addition to this list – intelligence agencies are identifying how these organisations are operating,” he said.

In light of the NAP committee’s proposals, a joint intelligence directorate has started weighing behaviour of proscribed organisations in the National Crisis Management Cell (NCMC) and Nacta with coordination of the Inter-Services Intelligence (ISI) and Intelligence Bureau (IB), he added.

Meanwhile, an official statement issued by the interior ministry said that a comprehensive analysis is under way to identify how many of the proscribed groups are active inside or outside the country.

Identification of Tehreek-e-Taliban Pakistan (TTP) affiliates and sleepers is under way and Punjab has identified 95 individuals who are suspected to have links with terrorist organisations, it added.

The executive director of the Pakistan Institute for Peace Studies (PIPS), Amir Rana, observed that though there is no specific mechanism of banning any organisation, the government can review its policy towards banned outfits and reexamine their behaviour.

Around 23 proscribed organisations are functioning with different names—like Jaish-e-Muhammad was operating as Khudam-e-Islam or Al-Rahmat Trust, he explained.

Nacta and the NCMC are coordinating with the Balochistan home department to identify the Baloch groups which are reportedly running their training camps in Afghanistan or Iran, another senior official of the ministry revealed.

The intelligence agencies have also identified few Madaris having links with terrorist organisations he said.

The law-enforcement agencies have started a crackdown against thousands of suspected terrorists. The National Counter Terrorism Help Line 1717 has received 358 actionable calls during last nine days which were promptly conveyed to relevant forums, stated an official statement. “Daily combing/search operations are underway throughout the country and up to now more than 2,000 persons have been arrested in these operations,” it added.