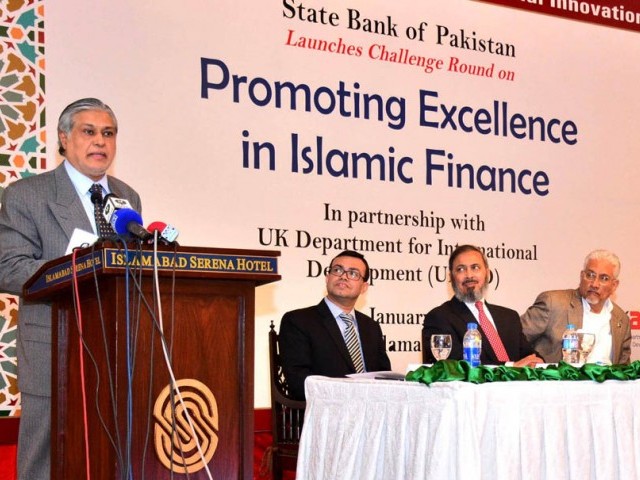 ISLAMABAD: The federal government on Friday launched the third round of Financial Innovation Challenge Fund designed to promote Islamic financing, the share of which is rapidly growing in the overall banking industry in the country.

The fund was launched with the assistance of the United Kingdom under the UKAid-sponsored Pakistan Financial Inclusion Programme being executed by the State Bank of Pakistan.

The earlier two rounds focused on promoting innovative agricultural and rural financing in the country.

“The Financial Innovation Challenge Fund will go a long way in promoting an inclusive economic growth through demand-driven innovative financial services for the low-income and unbanked population,” commented Finance Minister Ishaq Dar while inaugurating the fund.

He said the Financial Innovation Challenge Round was designed to encourage competition and introduce a world-class dynamic structure capable of meeting human resource requirements of the industry and act as a research incubator providing innovative products.

Dar pointed out that the Islamic mode of financing was growing at a phenomenal pace across the world and current size of the Islamic finance industry, estimated to be over $1.8 trillion, was almost twice the level a decade earlier.

The industry now constitutes over 10% of the country’s financial system and keeps a strong growth momentum.

Dar stressed that the Islamic finance industry was working well below its potential. Only one-fifth of farmers have access to the formal financial system while just 5-6% of small and medium-sized enterprises (SMEs) receive bank financing.

Islamic banks should approach these largely untapped markets through their asset-based and risk-sharing products and contribute to catalysing growth in the real economy, he said.

Similarly, linkages between Islamic banks and microfinance institutions could be instrumental in channelling surplus liquidity of Islamic financial institutions towards meeting financial services needs of the low-income population.

This will help Islamic banks to improve their perception among people and facilitate the government in achieving the Millennium Development Goals, which are largely in line with the basic philosophy of Islamic finance, ie, facilitating development of a fair and equitable economic system and ensuring broad-based welfare and well-being of the masses.

Dar said the government was putting special emphasis on the promotion of Islamic banking and took a number of steps in that regard.

Pakistan’s entry into the international Sukuk market after a gap of nine years through dollar-denominated Sukuk was received well by the investors and is a reflection of its seriousness in exploring Shariah-compliant avenues to finance the state’s needs.

A steering committee constituted to promote Islamic banking has prepared an interim report and its recommendations will help in setting a roadmap and deciding a future course of action for providing an enabling environment for the growth of Islamic finance.

Among the challenges highlighted in the report, the shortage of qualified Islamic finance professionals has emerged as a major issue.

The finance minister stressed that skills development played a crucial role in strategy formulation, product innovation and infusion of global best practices. The proposed Centre of Excellence will play an important role and help in overcoming capacity-building challenges by offering a comprehensive set of educational, training and research programmes.

He said the government would implement recommendations of the committee in order to put more emphasis on Islamic finance in courses starting from higher secondary level to undergraduate and post-graduate levels in business, law, finance and accounting.