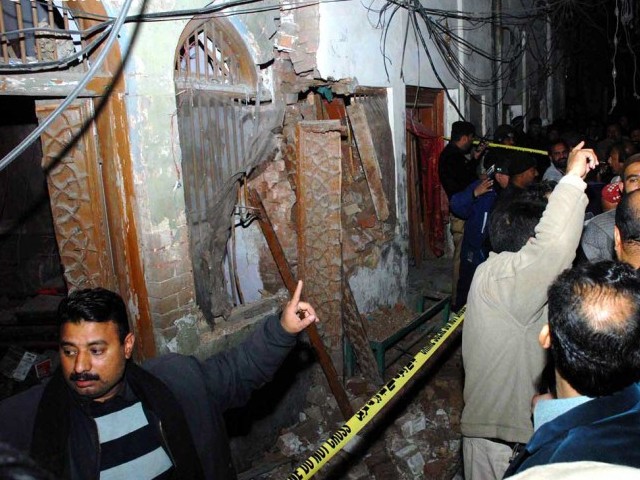 Officials stand outside the Imambargah where the blast took place. PHOTO: ONLINE

RAWALPINDI: Seven people, including a policeman, were killed and at least 17 others were injured when a powerful bomb exploded outside an Imambargah in Chittian Hattian area of Rawalpindi on Friday evening, the Regional Police Officer Umar Hayyat Lalika said.

The blast took place outside Imambargah Aun Mohammad Rizvi in Chittian Hattian where a congregation was being held. The blast was powerful enough to destroy the Imambargah’s gate, and inflict damage to houses near the site.

Express News correspondent Fahim Akhtar said that three to four ambulances had reached the area where the blast took place to evacuate the injured and dead. The victims had to be wheeled out on carts from the narrow lanes where the Imambargah is located.

They were taken DHQ hospital, Polyclinic and Benazir Hospital for treatment.

Some of the the dead were identified as Qaim Ali, Ali Mehdi, and Javed Zaidi. Acting City Police Officer Haroon Joya said that the policeman killed in the attack had been identified as Constable Amanullah.

The CPO said that the nature of the blast has yet to be determined, and it would be too early to say whether the explosives were contained in a suicide vest, or the attacker had rammed an explosive-laden motorcycle into the Imambargah gate. Rawalpindi Regional Police Officer Umar Akhtar Hayyat Lalika, however, said that the explosion was the result of a planted device.

One witness said that when the bomber was stopped at the gate of the Imambargah, he detonated his explosives. Another added that soon after power failed in the area, the blast occurred.

Another witness said that they were sitting in the packed hall of the Imambargah, with 50-60 people including women and children, when the explosion took place.

One witness said that at the time of the blast, two policemen were deputed at the site who too had suffered injuries in the blast.

A local resident said cellular networks stopped working in the area soon after the blast.

The blast site is located in Raja Bazar, a densely populated area of Rawalpindi. Lal Haveli is also located in the same vicinity.

Shahbaz has also sought a report on the incident.

The Shia Ulema Council has called for three days of mourning following the attack.