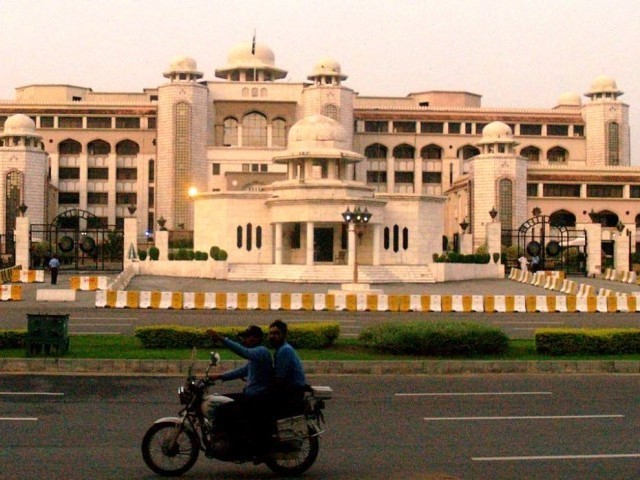 “Though both the premises have iron grills installed along the boundary walls, the wild boars are habitual of digging tunnels underneath to make their way across in search of food,” he said. PHOTO: NNI

ISLAMABAD: The Prime Minister’s House might be inaccessible for most of the people in Pakistan, yet an incursion of uninvited visitors is making things difficult for the authorities.

As night descends and fog shrouds the walls of the house, located over 55,700 square meters, wild boars sneak into the premises from its rear side connected to the Presidency.

Though the administration has sought help from the capital’s civic agency to curtail movement of undesired guests into the grounds after dark, the authorities have so far failed to keep them off limits. Eventually, the authority is left with no other option than to block the tunnels dug by these boars under the iron gates surrounding the entire house or even go to extreme measures by giving the boars poisonous feed, said an official of the Capital Development Authority (CDA) dealing with the matter.

“A formal request has been made by the PM House management to the CDA,” said an official of the environment wing. The official further said that CDA frequently receives such requests from the Presidency and Prime Minister House during winters.

Both buildings are located over vast areas, majority of which are covered with dense forests.

“Though both the premises have iron grills installed along the boundary walls, the wild boars are habitual of digging tunnels underneath to make their way across in search of food,” he said.

The official further revealed that poisonous meat was usually spread within the limits of the grounds covered with dense plantations within the Presidency and Prime Minister’s House.

Breaking their own law

In a stark contrast, however, the CDA’s environment wing’s laws state that anyone who kills a wild boar shall be fined Rs11,000.

“Trapping them alive is almost impossible and dangerous,” the official said, while strengthening his argument that killing these animals through poisoned feed is the only way to get rid of them if they get trapped inside the premises.

The exact population of wild boars in Islamabad or within the protected Margalla Hills National Park Area is neither known to the CDA nor WWF-Pakistan.

Currently, there is no official ban on the hunting of wild boars within the limits of Islamabad Capital Territory except in the protected park area.

“It was a common practice in the past and the CDA used to hand out permissions during boar hunting season, which usually began end of December and culminated by mid-February,” the official said.

But with the worsening law and order situation, obtaining permission for hunting has become difficult. Few years ago, the authority linked the issuance of hunting permission with an NOC from the ICT Administration.

“Now a two-tier approval is needed to legally hunt wild boars,” he said.

The ICT Administration issues an NOC for carrying weapons, while the CDA at the second stage issues the permission.

Owing to the law and order situation, it is almost impossible to obtain permission from the ICT Administration for carrying weapons inside the federal capital.

He said during the last hunting season, CDA had issued only five permits for hunting wild boars in areas of Zone-III and other open spaces across Islamabad.