A mother says she used to press her neighb­ours to utilis­e the facili­ty, not knowin­g it was actual­ly harmin­g everyo­ne.
By Shabbir Mir / Photo: Shabbir Mir
Published: January 3, 2015
Tweet Email 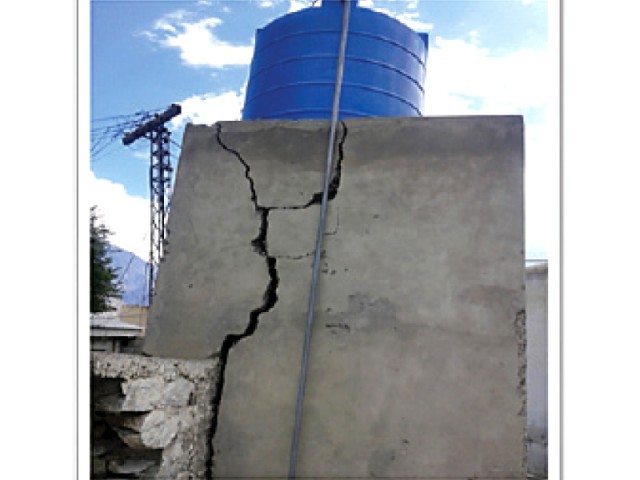 The facility nearby Naz’s home was open to the public twice a day for nearly an hour in the mornings and evenings. PHOTO: SHABBIR MIR/EXPRESS

Health-conscious mother of three Naz Ara and her neighbours in Kashrote were devastated when they learnt the local public water filtration plants are contaminated with E. coli bacteria.

The water filtration plant at Kashrote which Naz previously used was one of dozens installed in the region during former military ruler Pervez Musharraf’s government. The filtration plants were to provide free and clean drinking water facilities to the general public.

The facility nearby Naz’s home was open to the public twice a day for nearly an hour in the mornings and evenings.

Every day, Naz would take empty bottles to the plants and fill them to ensure she used the public facility offered by the government to its maximum potential.

The majority of Naz’s neighbours relied on tap water anyhow as opposed to using the filtration plant, which was a mere five-minute walk from her home. Even so, she often asked her neighbours to take advantage of the facility to stay healthy. “Why are you bent on sacrificing the health of your family? This is uncalled for. Why don’t you use the facility made for you?” she would enquire.

Incidentally, Naz was baffled when she read a December news report that the government had issued orders to close down all the filtration plants in the city since the water was not fit for human consumption.

Gilgit DC Ajmal Bhatti ordered closure of the plants in December after the Environmental Protection Agency (EPA) deemed the water not potable.

“I was just bewildered. It was shocking news for me as I had been using contaminated water for so long.

Not only this, I also urged others to follow suit,” the dejected mother told The Express Tribune this week.

She had been certain the facility caretakers would be cleaning the filtration plant regularly to keep the quality of the water at a high standard. “I realise now that those avoiding the facility were better off,” said Naz.

EPA Assistant Director Khadim Hussain said, “Of the 56 water filtration plants we inspected, only two were in good condition. The rest were providing contaminated water containing a high number of E. coli colonies.”

E. coli bacteria is an indicator of water quality. When found in water samples, it means the water contains other pathogenic microorganisms which can cause typhoid, diarrhea, gastroenteritis and numerous other diseases.

According to experts, water pollution is one of the major threats to public health in Pakistan. Drinking water quality is poorly managed and monitored. Regarding the quality of drinking water, Pakistan ranks low at number 80 among 122 nations.

Both surface and groundwater drinking sources are contaminated with coliform bacteria, toxic metals and pesticides throughout the country. The drinking water quality pNazmeters set by WHO are frequently violated.

For the record: ‘G-B governor not target of bomb’