A stash-ful of designer bargains

A stash-ful of designer bargains 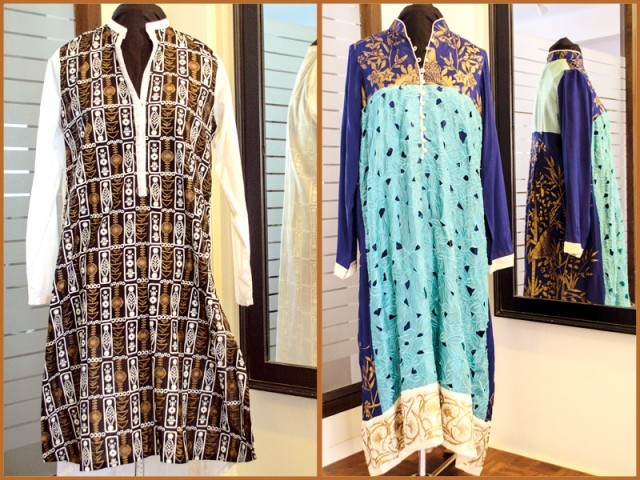 Pictured above is a blue cut work Turki from the current Nida Azwer sale, originally worth Rs24,000 and on sale for Rs14,400 at Secret Stash. PHOTO: PUBLICITY

Who doesn’t love a good bargain? When prices are slashed, no self-respecting shopaholic can look away. It is precisely this sentiment that Nazish Hussain latched on to when she ‘stashed’ a range of designer bargains on the internet. Her fledgling e-store Secret Stash boasts priced-down brand new and gently used products by international brands as well as designer flash sales.

So, what’s new about that? There are plenty of e-stores that offer deals, discounts and all-out sales. But hardly any of them has had the foresight to host designer sales at half or slightly more than half the original price. This is, perhaps, Secret Stash’s greatest pull so far. The online portal is expected to rivet the attention of a fashion-savvy college girl or working woman. Never before had Sania Maskatiya or Nida Azwer apparel been so easily available, at prices below the Rs5,000-mark. High fashion available on a shoestring — who could ever resist that?

“I particularly want to host flash sales by brands that hardly ever go on actual sale,” says Nazish. “Sania Maskatiya and Nida Azwer stores don’t have sales and yet, the designers want to clear up shelf space in order to bring in new stock,” she adds. That’s where the e-store facilitated the designers by trying to sell their older stock and samples. “Most of our online customers don’t mind that they’re buying an older collection as long as it has designer aesthetic and quality.”

Judging by the hosts of ‘sold-out’ captions on the apparel, the just-ending Nida Azwer online sale has been successful, especially for clothes priced below Rs10,000. “Each product’s image is accompanied by size and fabric details. But sometimes, customers are not comfortable with spending too much on an item that they have only seen on the internet,” comments Nazish. “In this case, we give them the option to make a half-an-hour appointment and see the products first-hand.”

Clothes may not be tried on but customers can measure them to see if they fit. Similarly, the store’s range of branded shoes, sunglasses, bags and wallets, among other items, can be seen before purchase. This facility is only available to people based in Karachi, which is Secret Stash’s home-city. But the fact that the store is open to personal appointments has helped build buyers’ faith in it.

“We’re clear about whether the item being sold is brand new, in which case, it may have a higher price, or is slightly used,” says Nazish. “For online sales, we have the cash-on-delivery option, where buyers are charged a nominal shipping fee. And people who make an appointment and then decide to make purchases personally are charged the selling price stated online.”

Prices at the store are decided by the person selling them, who can be a designer or just somebody wanting to dispose off their designer shopping. Given the variety of brands it features, rates vary from affordable to steep. “The more expensive items, for instance, a brand new bag priced at Rs 40,000, may not sell as easily,” admits Nazish. “Then again, it would cost much, much more if bought abroad and so, it’s still a bargain.” The next sale in line, which begins this Monday, is one on bags by Jafferjee’s, another high-quality brand that has never had sales at its outlets. “We’re also in talks with a few designers,” says Nazish.

It’s e-tail with a twist and, sometimes, a tiny twist is all it takes to get noticed. The Secret Stash e-store, launched just a few months ago, with its flash sales and discounts could become an online shopping hotspot. The store can be checked out at: www.secretstash.pk.

Maliha Rehman is a fashion and lifestyle journalist with an obsessive, compulsive need to write. Log on for more updates on Twitter
@maliharehman