Minist­er says half of the money will be used for rehabi­litati­on of TDPs.
By Shahbaz Rana
Published: December 30, 2014
Tweet Email 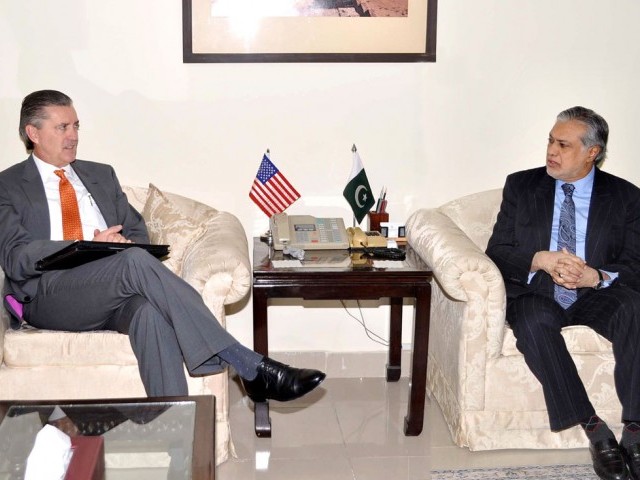 The United States is to disburse $532 million to Pakistan under the Kerry-Lugar assistance package and Islamabad hopes to use half of the amount for the rehabilitation of tens of thousands of tribesmen displaced by the ongoing military operation in North Waziristan.

US Ambassador to Pakistan Richard Olson informed Finance Minister Ishaq Dar in a meeting on Monday that the US Congress has notified the Obama administration to release $532 million to Pakistan, according to the finance ministry. Olson also discussed the agenda for the scheduled visit of US Secretary of State John Kerry to Pakistan in January 2015.

The ministry didn’t clarify when the money will be disbursed nor did it explain the sectoral breakup of the financial assistance. It said the money would be given under the civilian assistance package, Kerry Lugar Act of 2010 which expired in September this year.

Ambassador Olson said the $532 million aid would be given for energy, counter-terrorism, economic growth, community building, education and health.

“The government of Pakistan should spend a large amount of this assistance for the rehabilitation of the temporarily displaced persons (TDPs) of North Waziristan Agency,” Finance Minister Dar was quoted as saying in the finance ministry statement.

He said the government would brief foreign donors on the rehabilitation work being undertaken for restoring the life of the displaced Waziristan tribesmen and the flood-affected population. He added that the recent monsoon-induced floods were an unforeseen calamity that would surely have an impact on Pakistan’s growth projections but the government hoped to recoup under the current circumstances.

Earlier this year, Parliamentary Secretary for Finance Rana Muhammad Afzal had informed the National Assembly that Pakistan has so far received over $3.8 billion against the total obligation of $7.5 billion under the Kerry-Lugar Act. Almost three-fourths of this money had been spent without the government’s oversight. The US Embassy in Islamabad has already stated that the entire $7.5 billion assistance would take longer to allocate and disburse than the five-year period originally envisioned.

Ambassador Olson also offered condolences over the December 16 rampage by Taliban gunmen at the Army Public School in Peshawar which claimed 150 lives – mostly of schoolchildren.  Finance Minister Dar said the Peshawar school massacre was one of the saddest incidents in the history of Pakistan but the government has made a firm resolve that the issue of terrorism would be dealt with utmost force and the whole nation and political leadership has a consensus on this issue.

Ambassador Olson also congratulated the minister on the successful completion of the fourth and fifth IMF review and taking the foreign exchange reserves to $15 billion which provided the government with an opportunity to become a member of the International Bank for Reconstruction and Development.