We will not tolera­te if the admini­strati­on takes any action under pressu­re, warns Lal Masjid spokes­person­
By Tahir Khan
Published: December 27, 2014
Tweet Email 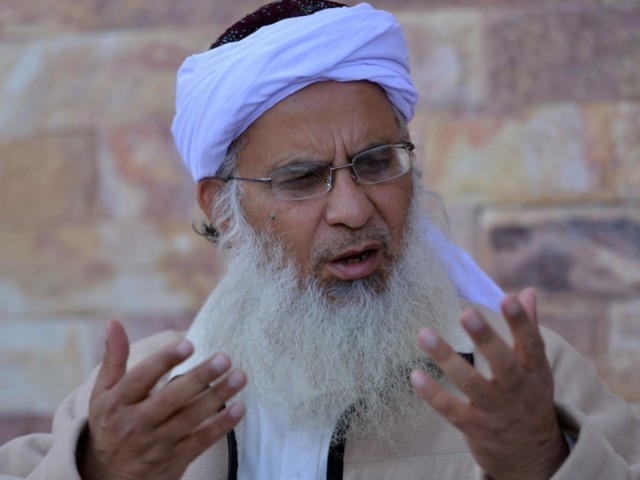 ISLAMABAD: Lal Masjid cleric Maulana Abdul Aziz will neither surrender to the police nor will he seek pre-arrest bail, a statement from the mosque’s spokesperson read on Saturday evening.

A court in Islamabad had on Friday issued a non-bailable arrest warrants for Maulana Aziz for allegedly threatening members of the civil society who had held protests outside his mosque. The civil society members wanted Maulana Aziz to unequivocally condemn the December 16 attack on the military-run school in Peshawar.

Lal Masjid spokesperson Mufti Tehseenullah on Saturday said that the case was “politically motivated” and that a few members of the “so-called civil society” had exerted pressure on the police to register a “baseless case” against the cleric.

“Maulana Abdul Aziz has decided in principle that he will neither surrender to the police nor get a pre-arrest bail in the baseless case.”

He also rejected claims made by civil society members about threats by guards of the mosque and said Maulana Aziz had condemned the attack and that there was no justification to register a case with the police.

“We will not tolerate if the administration takes any action under pressure,” Tehseenullah warned.