Ishaq was to be releas­ed Thursd­ay after Punjab govt withdr­ew reques­t to extend his detent­ion under public order laws
By AFP
Published: December 25, 2014
Tweet Email 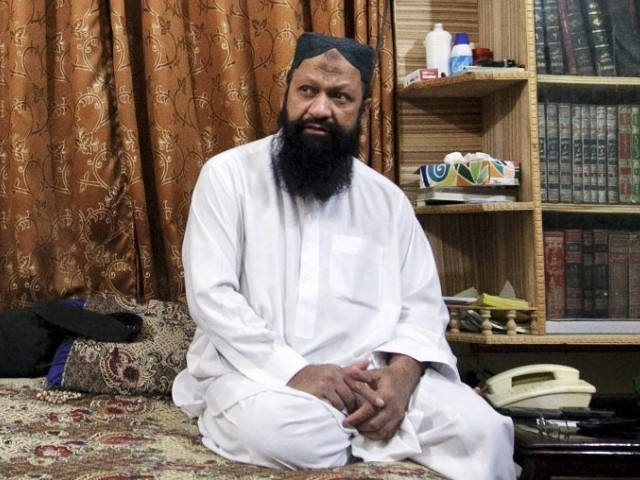 LAHORE: The leader of a banned sectarian militant group who was set to walk free from jail is being held for two more weeks in a murder case, officials said Thursday.

Malik Ishaq, the former head of Lashkar-e-Jhangvi (LeJ) which is dedicated to killing Shias, was to be released on Thursday after the Punjab provincial government withdrew a request to extend his detention under public order laws.

But he has now been detained in a murder case, a police official said, and is being held in the central city of Multan.

The news of Ishaq comes with the country ramping up its anti-terror strategy after an attack on an army-run school this month killed 150 people, spurring the country to set up military courts and drop its moratorium on capital punishment in terror cases.

“Ishaq was sent to jail on judicial remand until January 6 by an anti-terrorist court on Wednesday and he will be produced before the court again on January 7,” Ghulam Mohiuddin told AFP.

LeJ has claimed responsibility for numerous bloody attacks, including two bombings targeting Shias in Quetta in 2013 that killed a total of nearly 200 people.

Punjab Home Minister Shujah Khanzada also confirmed Ishaq’s arrest and said the government had decided not to release Ishaq, who is still facing several cases, because of recent security tensions.

“The government has arrested him again… on the basis of new cases registered against him,” he said.

Khanzada did not give details on the nature of the new cases.

Ishaq, named a “Specially Designated Global Terrorist” by the US, has been implicated in numerous murder cases and was accused of masterminding a 2009 attack on the Sri Lankan cricket team in Lahore which killed eight people.

An anti-terror court in May cleared him of inciting violence and of making speeches which fomented hate but he was held under maintenance of public order laws.

Prime Minister Nawaz Sharif also said on Thursday that the country will set up military courts for terror-related cases, as part of an ambitious anti-terrorism plan.

Six convicts have already been hanged after Sharif lifted a moratorium on executions in terror cases, and the military has stepped up operations against insurgent bases in the tribal northwest.

Officials said Monday that Pakistan plans to execute around 500 militants in the coming weeks.