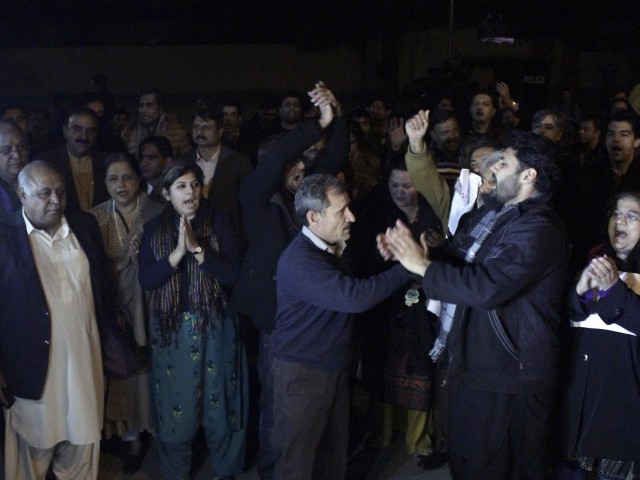 Nasir, who has been instrumental in galvanising public support through social media, said that the protest had acquainted with like-minded individuals, who now represent the campaign. PHOTO: MOHAMMAD JAVAID/EXPRESS

ISLAMABAD: Participants of a civil society protest demanding the trial of Lal Masjid chief Maulana Abdul Aziz remain resolute in their will. After success in getting an FIR registered against Aziz, the protesters are now waiting for the police to open the investigation on Friday.

Lawyer-turned-activist Jibran Nasir, who has been spearheading the protest, remains undeterred, despite allegedly receiving a threatening call from the Tehreek-e-Taliban Jamatul Ahrar faction’s spokesman, Ehsanullah Ehsan.

“We have requested the police to conduct a focused investigation…then we will know whether to continue chanting slogans or to celebrate,” he told The Express Tribune. “This is a story of the will of the common man. This is a common man’s protest against all the rogue clerics who use and manipulate the name of Islam for their own interests,” he said. Nasir, who has been instrumental in galvanising public support through social media, said that the protest had acquainted with like-minded individuals, who now represent the campaign.

Adarsh Ayaz, a freelance journalist, heard about the cause on social media. “I’m not really in the favour of vigils because…solidarity is not just about lighting candles or sky lanterns or telling people that we mourn you,” he said, adding that instead, there should be some focus, goal and action to aspire towards and something that will have an impact. Sobia Kapadia, an architect, said she had only one motto — humanity. “We have too many differences, but this is not the time to portray the differences. This is the time to portray commonality with focus,” she said. At the protest, she added, one finds a wide range of viewpoints and that is the beauty of it. The protest, she said, was not just about the mosque, but it should invited people to question the status quo.

“This is a cause that is very close to my heart because it is very black and white,” said Shaan Taseer, a chartered accountant and son of the slain Punjab Governor Salman Taseer.

Taseer was present on the second day of the protest. “The protesters had a huge sense of solidarity – everyone knew why they were there. I like the fact that this protest goes to Lal Masjid. We are not sitting in some little press club or enclosed place. We are going right to the enemy,” he said.

The cleric made the mistake of threatening us, he added, and there was a very common emotion. Nothing was planned. We just walked down to the police station like ordinary citizens and we said that we are not going to take this. We stand for very simple, basic human values. These are not complicated political assertions. The killing of children is beyond any political persuasion or opinions.”

Haider Imtiaz, a lawyer, said that they were challenging a narrative that dominates through fear. “We have witnessed [right-wing] groups and individuals become so powerful that they are able to dictate their terms over society. This is what we have to challenge. We are challenging them on an ideological level by offering a counter-narrative. We are also highlighting the role of apologists and sympathisers who were conveniently ignored.”

Ayaz said that the protest was not anti-religion. “We are trying to reclaim our mosques and religion. This ideology, this manipulative mindset we are protesting against, is using Islam as a tool, as a means to achieve vested interests. They do not represent the true religion. Also, we are not only representing Muslims here, we are representing the whole country.”

“If anyone thinks any political party is hijacking our agenda, we are waiting for those political parties to step forward and own the movement,” said Nasir. “After the killing of those kids in Peshawar, we also died. That is why we are not afraid to die again. In fact, we are willing to die for the counter-extremist narrative.”

Arresting Aziz is the first rung of the ladder, he said. “We are now talking about dedicating our lives to a cause which makes the country safer for our children, wherever they are in Pakistan.”