Civil, military leadership resolve to eliminate terror networks in 'every nook and corner'

Civil, military leadership resolve to eliminate terror networks in 'every nook and corner' 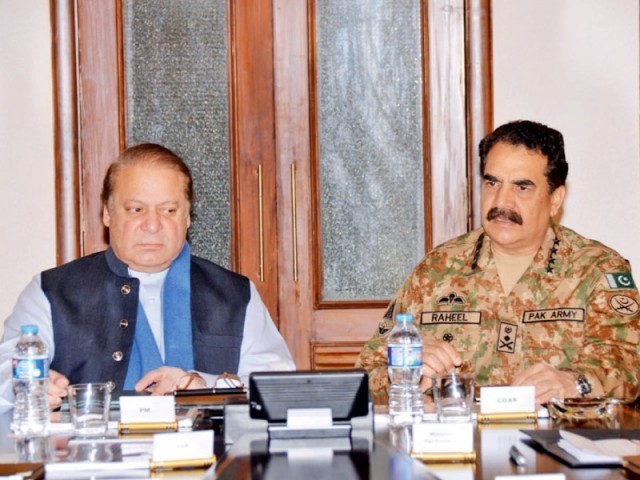 According to a statement from the PM House, different short-term and medium-term steps to eliminate terrorism were discussed in the civil-military leadership meeting.

“The participants showed resolve to eliminate terror networks in every nook and corner of the country,” the statement read.

Further, the civil, military leadership vowed to continue the ongoing Operation Zarb-e-Azb launched against militants in North Waziristan and the Federally Administered Tribal Areas till the last terrorist is eliminated.

The premier said that he will lead the fight against terrorism whatever the consequences.

“No distinction will be made between those who have committed acts of terror and those who are harbouring, facilitating and financing it,” the premier said.

“National unity is needed to defeat the terrorists,” the premier said.

Further, claiming the blood of ‘martyrs of this war’ will not go in vain, PM Nawaz reiterated, “Extremists and terror ideology will be defeated at any cost.”

Appreciating the sacrifices made by the nation and armed forces in the war on terror, PM Nawaz said, “Sacrifices given by the people of Pakistan including Pakistani forces are unparalleled in this war.”

Further, the participants reviewed the progress in the ongoing operations in North Waziristan and Khyber Agency.

According to sources, before the meeting Dar and Nisar apprised the prime minister regarding developments of the parliamentary committee on the national action plan.

Another meeting of the parliamentary leaders has been summoned in Islamabad on Wednesday to finalize national counter-terrorism strategy, Radio Pakistan reports.

Govt committed to repatriating Afghan refugees by end of 2015: SAFRON