Imran also said that the police in Khyber-Pakhtu­nkhwa are not fully equipp­ed to fight terror­ism
By Web Desk
Published: December 22, 2014
Tweet Email 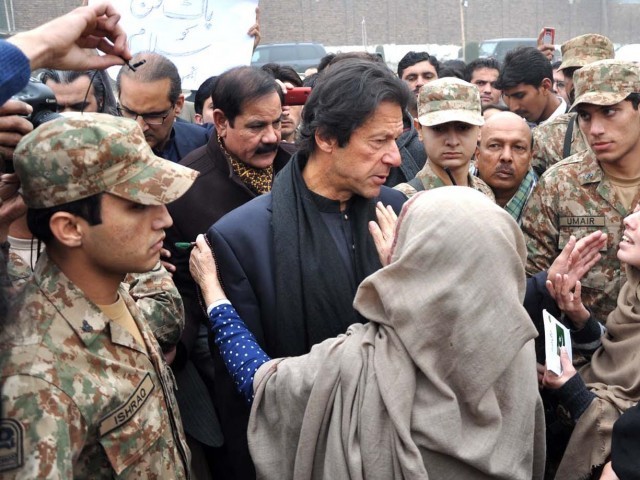 PTI chief Imran Khan speaking with parents of the Army Public School during his visit to Peshawar. PHOTO: INP

PESHAWAR: Pakistan Tehreek-e-Insaf (PTI) chief Imran Khan visited a terror-hit school in Peshawar on Monday, following which he called on the federal government to equip Khyber-Pakhtunkhwa with adequate resources to fight terrorism.

The PTI chairman toured the damaged Army Public School, where 148 people, mostly school children, were killed on Tuesday following an attack by the Tehreek-e-Taliban Pakistan (TTP).

He toured the damaged parts of the school and later met with the victims’ families to offer condolences.

Security was tightened upon his arrival and anyone entering the school was thoroughly checked before they could pass through.

Later on, Imran also visited the residence of the school’s principal Tahira Qazi, who was among the people who were killed in the brutal attack.

During a press conference in Peshawar late Monday afternoon, Imran said border control on the Pakistan-Afghanistan is crucial to combat terrorism.

“Waging a war [against militancy] is difficult but not impossible,” the PTI chairman said. “We need to unite to fight the menace of terrorism,” he added.

Further, Imran said that the police in Khyber-Pakhtunkhwa (K-P) are not fully equipped to fight terrorism.

“The police force isn’t trained to fight terrorism and they need to be provided with intelligence by the federal government,” he said.

Imran also said that Frontier Corps (FC) should be deployed back to the tribal areas as the reason why the force was formed in the first place was to look over tribal areas.

“Around 5,000 police personnel should be recruited from the tribal areas and be deployed in K-P,” Imran said.

The army is currently engaged in operations, Zarb-e-Azb and Khyber-I, against militants in North Waziristan and Khyber Agency.

Moreover, he also said that illegal refugees from Afghanistan should be sent back.

He also stressed that when schools reopen after winter break, a security plan should be formed beforehand and a person within the school should be given the duty of reporting any suspicious activity through a special mobile phone “with the hit of just one button.”

Get into the Christmas spirit!