500 convicts to be hanged in coming weeks: Nisar

500 convicts to be hanged in coming weeks: Nisar 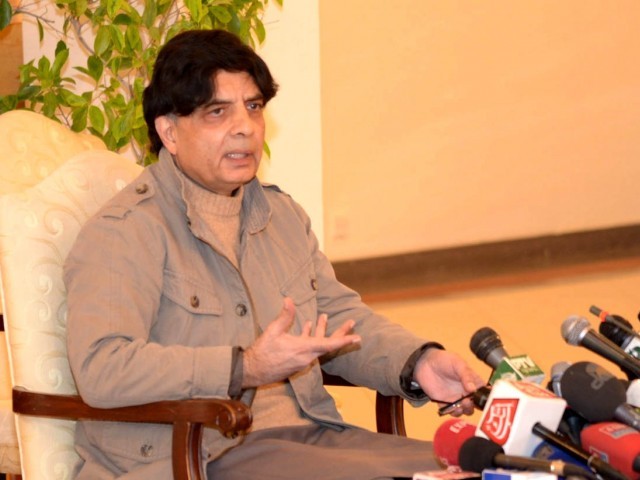 If our aim was to target civilians, we could have wiped out Miramshah with a couple of strikes, says Interior Minister Chaudhry Nisar. PHOTO: PID

ISLAMABAD: Around 500 prisoners convicted on terrorism-related charges will be executed in the next two to three weeks, Interior Minister Chaudhry Nisar Ali Khan said on Sunday while sharing with the media details of a national action plan against terror.

“The interior ministry has cleared these prisoners for execution and their mercy petitions have already been rejected by the president,” Nisar told a news conference in Islamabad.

The decision to lift the moratorium on the death penalty in terrorism-related cases was taken before the Peshawar school attack, the minister clarified. “Army chief General Raheel Sharif had taken up the issue [of capital punishment] with Prime Minister Nawaz Sharif before the Peshawar tragedy.”

Nisar warned that the decision to execute convicted terrorists could have severe repercussions as suggested by intelligence reports. “But we should not let our guard down if we want to avenge the victims of the Peshawar attack… we are in a state of war,” he said. “We will win this war.”

About the national action plan against terrorism, the minister said the civilian and military leadership would sit together on Tuesday to discuss the strategy being prepared by counter-terrorism experts and the National Action Plan Committee (NAPC) before giving a final nod for action to the armed forces.

“The experts’ group will most probably give its recommendations to the NAPC on Monday [today],” he said. “The panel will then discuss the plan in the evening [on Monday].”

According to the minister, the experts received a briefing at the military headquarters and would continue their marathon meeting throughout Sunday night.

Sharing other steps the government has taken in the aftermath of the Peshawar massacre, Nisar said his ministry has asked all four provincial chief ministers to convene weekly meetings of police officers and discuss measures to counter any retaliatory moves by militants in response to the ongoing action against them. He added that all provincial police chiefs have also been directed to meet their district police officers and chalk out a strategy to keep a check on strangers in every city.

In response to a question, the minister said an Ulema conference would also be convened in the coming weeks to discuss security issues.

Nisar said the terrorists who carried out the Army Public School attack were Pakistanis, as initial reports had suggested. He added that the police and security forces have arrested several people suspected of planning the dastardly attack in the aftermath of the tragedy.

During his briefing, Nisar stressed that the Pakistan Army does not target women and children. “The Pakistan Army has never targeted the families and children of militants,” he said, adding that before launching the offensive in North Waziristan Agency in June, the country’s civil and military leadership had the mutual stance of ensuring ‘minimum to no casualties’.

“If our aim was to target civilians, we could have wiped out Miramshah – where both militants and civilians live side by side – with a couple of strikes,” the minister said. “But we do not target non-combatants.”

Nisar said fighting terrorists was easier for other countries since terrorists looked different from native populations. “But in Pakistan, militants and their sympathisers look like us and live among us. It is an internal war for us.”

He urged the nation to unite in the fight against terrorism just as it united in grief following the Peshawar attack. “The army has been fighting terrorists for some time now but the nation needs to stand up and join the fight,” he said.

He requested the media to refrain from giving coverage to militants and urged hotels and houseowners to thoroughly check potential tenants’ credentials and backgrounds before renting out their property.

Nisar also appealed to mosques and madrassas to report suspicious people and asked cellular service providers to issue SIM cards only after thorough scrutiny. “The security of the nation is our top priority,” he said.