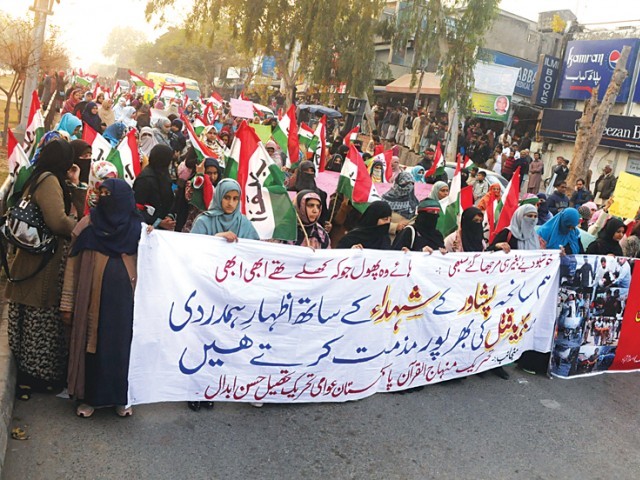 ISLAMABAD: Pakistan Awami Tahreek (PAT) held a protest rally from Zero Point to Abapara Chowk on Sunday, against the killing of schoolchildren in the militant attack on the Army Public School (APS), Peshawar.

The participants of the rally were holding banners and placards inscribed with slogans against the terrorists.

The PAT workers demanded of the government to take practical steps for the arrest of the people involved in planning the attack and award exemplary punishment to them so as to curb any such terrorist activity in the future.

PAT Central Secretary Khurram Nawaz Gundapur strongly condemned the killing of the schoolchildren and said that it was a tragedy for the entire country of Pakistan and precedents of such incidents were rare in human history.

He said that the nation would have to stand up against the terrorists by supporting the armed forces.

Speaking on the occasion, lawyer Ahmed Raza Kasuri said, “We have gathered here to express our solidarity with the martyrs of Peshawar and to demand that principal of APS be awarded Nishan-e-Haider. The next Nobel Peace Prize should be given to the children who were killed in the Peshawar attack.”

In a strange comment, he also requested the Pakistan Army to take control of the government the way they were “already controlling the foreign policy and the internal security matters.”

They said that it was the first incident wherein the innocent students were targeted in order to demoralise the nation.

However, they said that the terrorists failed to succeed in their nefarious designs to frighten the peaceful people because the incident had united the nation against the terrorists.