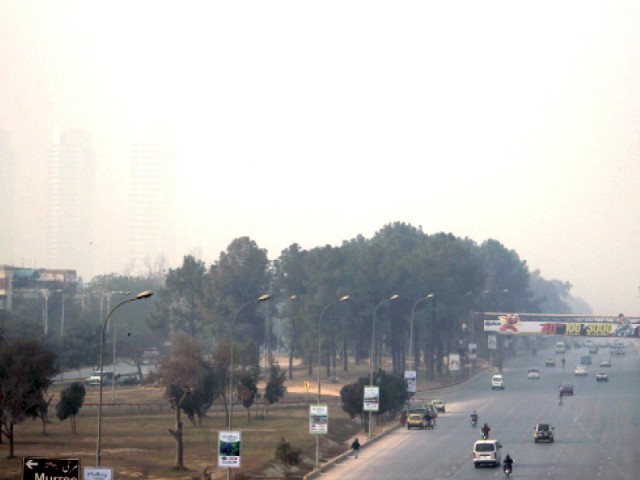 The level of dust in Islamabad is so high that the three towers of Centaurus beyond the trees are barely visible. PHOTO: MUHAMMAD JAVAID/EXPRESS

Major construction projects such as roads and freeways are important for economic development. During construction, however, such projects pose a significant risk not only to the environment but also to the residents of built-up areas.

The residents of Islamabad and Rawalpindi particularly those living adjacent to Murree Road, Peshawar Mor, Blue Area and other areas are facing serious health hazards due to the rising dust.

Piles of excavated sludge, mud and other materials have been dumped along roads by the contractors and developers, taking a toll on citizens’ health, with citizens frequently visiting hospitals to get medication for allergy and respiratory diseases.

The visibility of the rising dust in atmosphere could be seen with a naked eye, but teams of the Capital Development Authority (CDA) and the Environment Protection Agency (EPA) have failed to ensure implementation of mandatory guidelines for contractors to minimise the impacts of construction work, despite the allocation of Rs178 million for environmental works including monitoring, training and plantation.

“The number of people suffering from dust allergy and respiratory diseases have jumped manifold in the last couple of months,” said a doctor at the Benazir Bhutto Hospital (BBH). A source at the hospital that around 500 patients visit the outpatient department (OPD) every day, around 60 to 70 of whom with allergy and respiratory complications. He said that this number was only 20 to 30 people a day last winter, before work on the project had begun.

“The non-implementation of environment management and monitoring plan (EMMP) by contractors in Islamabad is one of the main reasons of dust and environmental pollution in the capital,” said an EPA official, claiming that they have written a letter to the implementers to ensure implementation of the construction guidelines.

The excavated dirt, mud and other construction material strewn along roads are another major cause of air pollution, as clouds of dust rise in the air every time a vehicle drives off.

Interestingly, the EPA did not have proper data on the actual level of pollution in the federal capital and the equipment granted to it by the Japan International Cooperation Agency for monitoring air and water pollution is rusting at the EPA Islamabad office.

According to the EMMP, the contractors do not spray water on the construction site in the federal capital to control the rising dust and water is only showered at a particular section of the metro bus route from Faizabad to Chandni Chowk, as the residence of a federal minister belonging to the ruling party is situated in its proximity on Muree Road.