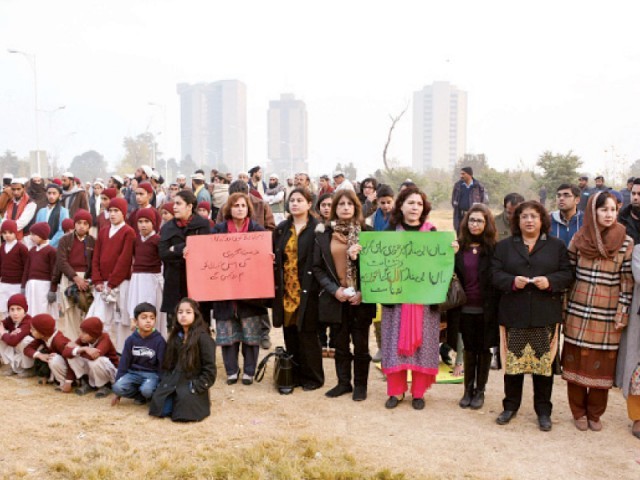 Protesters, who had been demonstrating outside the mosque for two days and lodged an FIR against the cleric on Friday, said they would now protest outside Aabpara Police Station.

Gathered outside the National Press Club on Saturday to express solidarity with the victims of the Peshawar massacre, the activists raised slogans and held placards against the terrorists and their sympathisers.

Jibran Nasir, who was spearheading the protest, said that the ball was now in the state’s court. “We appeal to all bar councils to join us. Our struggle is for peace, humanity, and the future of the country,” he said.

He also requested that the media not give airtime to terrorists and their supporters and promote a softer image of the country. He asked the state for proof of the executions of terrorists.

Dr Pervez Hoodbhoy said grieving over the Peshawar tragedy was not enough.  “We need to identify the culprits of the mass murder and unflinchingly admit to it. It is clear that Tehrik-e-Taliban Pakistan and other extremists who heartlessly killed our children are our enemies,” he said, adding that they will not tolerate such brutality. He called for reforming the curriculum of schools and seminaries, which was radicalising society and polluting the minds of students.

“How many deaths will it take before our people wake up to the fact that we have to finally confront our own demons, which all of us are responsible for creating over the last 30 years,” said musician Arieb Azhar, adding that it was high time to purge society of these demons, because what they stood for was against all interests, religions and humanity itself. He further said that until all different sections of society realise that they have to be unified against the demons, there was no future for the country.

“I want the state to take action and I want ‘the criminal’ Aziz to be investigated,” said Shaan Taseer, one of the complainants against Aziz in the FIR.

“Supporters of terrorists should also be taken to task,” said rights activist Farzana Bari, adding that the people had done what they could and it was the responsibility of the state to proceed with legal action. “If they arrest these people, it will send out a good signal and show the government’s commitment that they are really serious.”

Next to the civil society protest, hundreds of seminaries students, under the Wafaq ul Madaris Al-Arabia, had assembled to express solidarity with the Peshawar attack victims.