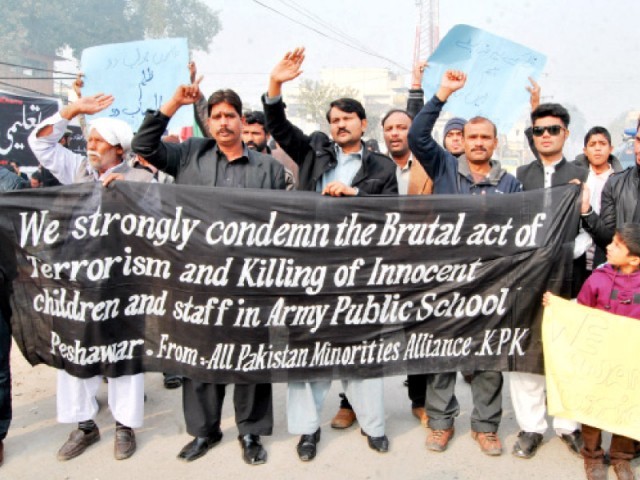 As thousands across the country bay for the blood of the Taliban who massacred more than 130 students in cold blood at Army Public School, the city’s students are suggesting a less brutal way of honouring the slain schoolchildren and teachers.

Students of various colleges and universities have been holding a taleemi dharna (education sit-in) outside the Peshawar Press Club for the past few days demanding that the government build schools and libraries in the name of each student and teacher martyred in the brutal attack.

Their demand seems to have struck a chord with lawmakers of the ruling Pakistan Tehreek-e-Insaf who have assured the participants of the taleemi dharna that the provincial government will honour the victims.

Adviser to the Chief Minister on Technical Education, Malik Shah Mohammad, and PTI lawmaker Zareen Zia visited the sit-in on Saturday and spent over an hour with the students, listening to their demands.

A large number of students are participating in the sit-in led by student leaders Waqas Buneri, Mushtaq Durrani, Shafiq Gigyani, Taimur Kamal, Suleman Yousafzai and Wasiullah. Leaders of various political parties, members of civil society as well as locals have also visited the camp and expressed their support to the students’ demands.

Addressing the sit-in on Saturday, CM’s adviser Shah Mohammad said the provincial government has strongly condemned the assault on APS. “The martyred children were our children. The December 16 massacre will never be forgotten and our government will avenge the deaths,” he said.

According to Shah Mohammad, the tragedy was the result of a massive security lapse and in its aftermath the provincial cabinet has decided to review its policies. “For the past 30 years, this region has been grappling with an insurgency. Militancy and extremism has left our economy in a shambles,” said the adviser.

“In order to fight and defeat the militants, we need the support of our youth,” he said.

Mohammad added Chief Minister Pervez Khattak has issued instructions to the home secretary to ensure strict security is in place across the provincial capital.

In her address to the participants of the taleemi dharna, MPA Zareen Zia said it is the government’s responsibility to provide protection to every citizen, but some “foreign elements” do not want peace to be established in Pukhtun regions.

“We will strive to eliminate militancy and militants till our last breath,” said Zia. Insisting that the government shares the grief of the bereaved families, Zia said the chief minister and provincial lawmakers visited the houses of the victims and personally condoled with the families.

Speaking to The Express Tribune following his visit, Shah Mohammad said the government recognises and appreciates the efforts of the university students. “They are raising their voice for the right to education and we support them,” said the adviser.

Dr Nasir Ahmad, a professor at the University of Engineering and Technology who was also at the camp, told The Express Tribune it was time for the government and forces to stop differentiating between ‘good’ and ‘bad’ Taliban and launch an operation against all militants. “Being a teacher, I fully support the demands of the taleemi dharna,” he added.