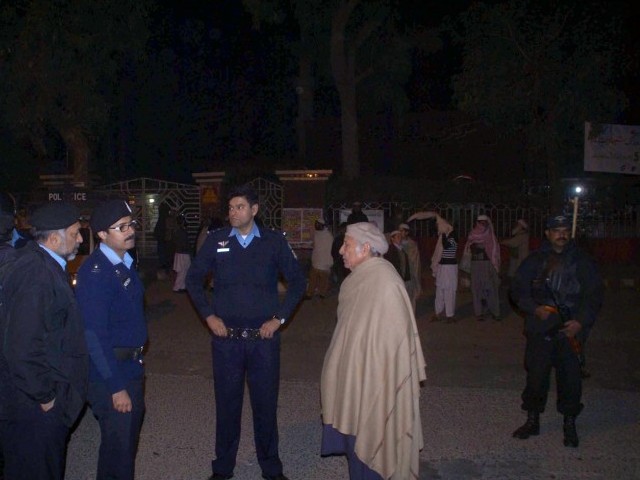 ISLAMABAD: A crowd gathered outside the main entrance of Lal Masjid in Islamabad on Thursday evening to hold a candlelight vigil for the victims of the Peshawar school attack.

The vigil started just after evening prayers with a two-minute silence for the school attack victims. It soon swelled to a protest with nearly 300 people who chanted slogans against the mosque’s chief Maulana Abdul Aziz and the Peshawar school attackers. They demanded that the police arrest Aziz by reopening cases against him.

The crowd was big enough to draw the attention of the city’s administration and the Islamabad police to deploy officials in riot gear to oversee its peaceful dispersal.

At laal masjid to protest insensitivity on the #PeshawarAttack pic.twitter.com/J9UhoBzfMW

A handful of Lal Masjid students also gathered outside the mosque and kept staring at the participants.

The police then not only stopped the organisers of the vigil from using a loudspeaker, which they were carrying, but it also accepted an on the spot application filed by the general secretary of Islamabad chapter of Ahle Sunnat wal Jamaat (ASWJ) Abdur Rehman Mauvia seeking ‘appropriate action’ against those gathered.

The charges mentioned in the application include, “Some representatives of so-called civil society gathered in front of Lal Masjid and wrongly alleged Lal Masjid’s chief Maulana Abdul Aziz for Peshawar mayhem and that their act hurt public sentiments.”

The application was received by SP (City) Islamabad Police, who later told The Express Tribune that it was just to ‘defuse the tension’.

At one point when slogans of vigil participants became quite loud, which prompted mosque students led by Mauvia started shouting. This prompted the police request for additional units to control the crowd.

Within no time police armored vehicle, reserved force and personal of Rangers also reached the spot.

SSP Operations Asmatullah Junaejo then addressed the vigil participants and asked them to leave the venue. However, his speech was cut short by heckling and booing by the attendants.

“Instead of lecturing us, arrest the terrorist sitting inside the mosque,” one shouted in the crowd. “Protect the general public and their children instead of protecting terrorists and Lal Masjid,” yelled another.

Jabbar Khan, a civil society activist, said that Maulana Aziz’s statement where he refused to condemn the Peshawar incident had hurt the emotions of thousands of countrymen. “Why he is openly propagating his thoughts based on hate? He should be put behind bars by the authorities.”

Naeem Mirza said Lal Masjid was openly supporting terrorists who carried out attack on school. He also demanded stern action against such elements freely rooming in the society.

The crowd then dispersed peacefully.

Later, there were reports that an FIR had been registered against four participants of the vigil.

“Even animals kill for a reason: out of fear or hunger”