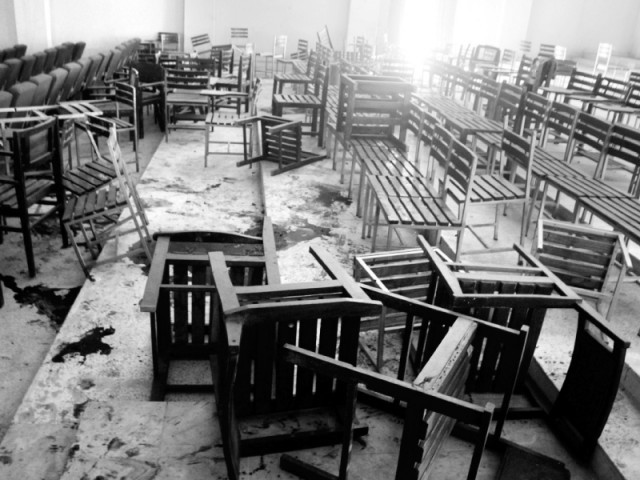 Those who believe Tuesday’s savage assault on Army Public School (APS) will dissuade parents from sending their children to school are clearly mistaken. If anything, parents are more determined. They say nothing can stop their kids from receiving an education.

“The brutal killing of innocent children at the Army Public School and Degree College is the most barbaric act in the history of the country, but we are not scared,” said Noorul Wahab, a father of two.

He said such cowardly deeds will not make them cower down. “If these enemies of education think their actions will frighten us, they are sadly mistaken,” Wahab said.

Musharraf Nadeem, another parent, told The Express Tribune he would rather “sacrifice” his fifth-grader son’s life than stop him from getting an education. Turning his attention to the tragic events of Tuesday, Nadeem said words cannot express the sorrow and grief the people of Peshawar feel.

Raheela Farooq, a mother of four, visited APS and said she will never forget this day. “Every parent was worried and come out to enquire about their children,” she said. “My children study at Peshawar Public School, but we all rushed out of the house when we heard about the incident at APS,” she recalled. However, security did not let her proceed any further.

Raheela said Peshawar has seen various blasts, but the people have not lost the courage or the will to send their children to school.

He added all teachers stood united and were willing to sacrifice their lives, but not their profession. Khan advised all parents to keep sending their kids to school and not worry about such cowardly acts.

Peace Education and Development Foundation Programme Manager Tariq Hayat saluted the family members of the murdered children and teachers, saying they were all brave souls.

He is confident the sacred blood of innocent children has not been shed in vain. However, he demanded the government provide security to all educational institutes of the city.