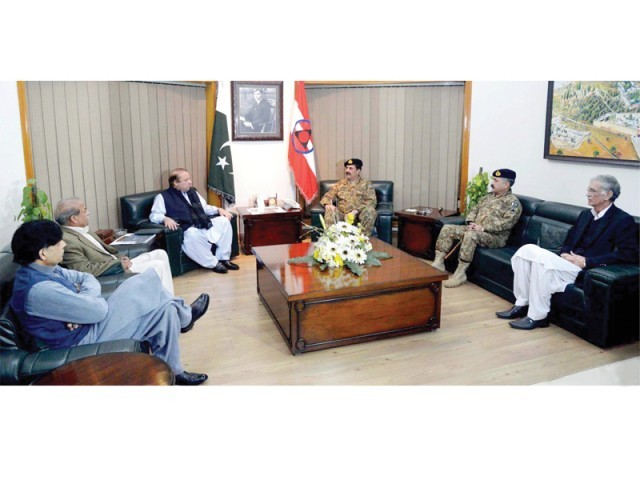 ISLAMABAD: The country’s top civil and military authorities are contemplating options, which include ‘hot pursuit’ of terrorists inside Afghanistan,  to deal with the threat of militancy in the wake of worst-ever terrorist attack in Pakistan on Tuesday.

Prime Minister Nawaz Sharif along with Army Chief General Raheel Sharif went into an emergency huddle in the corps headquarters in Peshawar to discuss the response to the attack which was described as a ‘national tragedy.’

According to officials familiar with the talks, the meeting focused on discussing options to eliminate the terror threat completely.

The Express Tribune has learnt that security agencies believe that Tuesday’s terrorist attack might have been planned by Tehreek-e-Taliban Pakistan (TTP) in Afghanistan where they allegedly have safe havens.

A security source said that while Operation Zarb-e-Azb and Operation Khyber-I would continue, Pakistan would immediately take up the issue of ‘terrorist sanctuaries’ with Afghanistan. The source disclosed that if Kabul fails to act this time, Pakistan may go for ‘hot pursuit’ inside Afghanistan to take out all those who were behind the Peshawar attack.

The final decision would be taken after today’s (Wednesday) meeting of political leaders convened by the Prime Minister in the provincial capital. Sources said the government would table the option before other political leaders for a consensus decision.

“But our priority will be to make sure that Afghanistan either takes action against all those elements or hands them over to Pakistan,” said another official while requesting anonymity.

The option of ‘hot pursuit’ had been contemplated in the past as well but Pakistan military opted against it due to its likely repercussions.

“But the Peshawar attack is a tipping point and we cannot tolerate such sanctuaries anymore,” cautioned the official without elaborating further.

Pakistan has long accused Afghanistan of not taking any action against sanctuaries of TTP in Kunar and Nuristan provinces.  Islamabad believes that ongoing offensive in the tribal areas can only be successful when action will be taken against terrorists on Afghan side of the border.

In his reaction to the tragic incident, the Prime Minister even talked of joint efforts by Pakistan and Afghanistan to tackle the menace of terrorism.