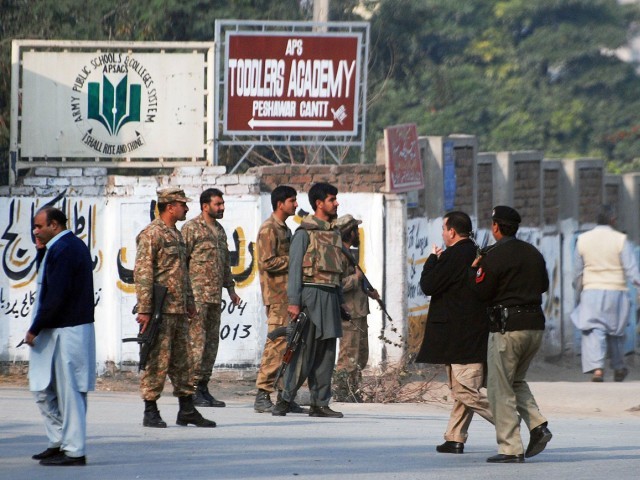 As news of the attack on the Army Public School in Peshawar spread on Tuesday, people from around the world tuned into to social media sites for information and to vent out their feelings.

With words not sufficient, many changed their display pictures to a patch of solid black colour to mourn the tragedy.

Black boards to white coffins…. The darkest day in the history of Pakistan

"A newsfeed of endless black squares – but after the solidarity, then…" a Facebook status. #Peshawar

Even if All my existence wants to Mourn & keep a Black DP, I can't. For the sake of These Dead Children & Future Generation, Keep Hope Alive

Plz ask every1 to wear Black Bands, be at schools, colleges, offices to show our solidarity with the victims @Fahdhusain @SaleemFarrukh

#PeshawarAttack quickly became the topmost trending hashtag across the world with over 350,000 tweets and statements from people, heads of state and celebrities.

Those innocent children that were killed didn't deserve it, my deepest condolences to all families involved in the tragedy #PeshawarAttack

You don't have to be Pakistani or Muslim to feel or express sorrow about the mass murder of kids. You have only to be human. #PeshawarAttack

Every time I think of #PeshawarAttack I loose my child. Unbearable grief and helplessness.

We do not realise the magnitude of this, we never can. This is in the most simple meaning of the word…insane #PeshawarAttack

The tragedy also saw one of the oldest rivalries in the subcontinent being put aside to show solidarity.

Cause children of Pakistan are like children of my India. And they do not deserve this. Shame on u Taliban. Let's Hashtag #IndiawithPakistan

It soon went viral among Indians and Pakistanis who set aside their animosity for their neighbour to express shock, disbelief and grief over the Taliban attack which left at least 141 people dead including 132 children and nine staffers.

It was soon trending with over 21,000 tweets so far. Here are some of the top tweets:

#IndiaWithPakistan We are sorry, babies. We couldn't even provide you the security of life. It's not about Pakistan but humanity.

#IndiaWithPakistan because no politics, religion, ideology is above the need to share the grief of Peshawar's parents

Thank u #India for showing solidarity on this dark day. Till today 16 Dec marked our animosity hope today changes that #IndiawithPakistan

Man of steel: Village smithy of Totai strikes while the iron is hot