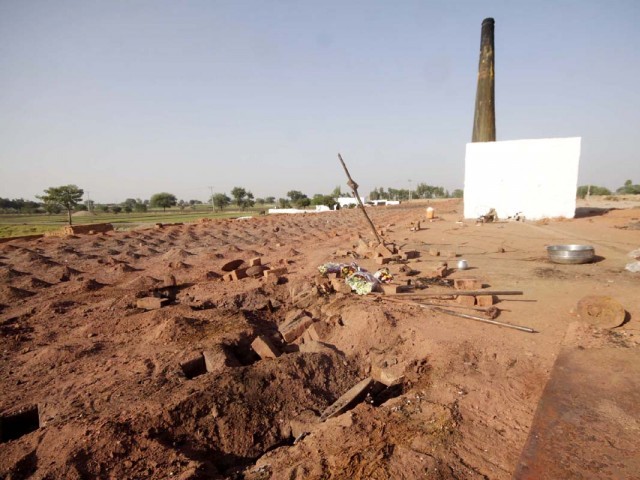 Site of the brick kiln where the Christian couple was burnt to death. PHOTO: SHAFIQ MALIK/EXPRESS

ISLAMABAD: The Punjab police on Monday confirmed that the Christian couple killed in Kot Radha Kishan last month, had been burnt to death in the presence of a few police officials among other witnesses.

In a report of the incident, including the post-mortem report of the couple, submitted to the Supreme Court on Monday by DCO Kasur and RPO Sheikhupura region, it confirmed that the couple had died of burning with dry heat.

According to the 17-page report, 138 people had been held responsible for the incident. Of these, 59 are currently in police custody while efforts are being made to arrest the rest.

“Challan of the case has been prepared by Joint Investigation Team, and it is being submitted to Anti-Terrorism Court-IV Lahore,” says the report, adding that the JIT was headed by SP Investigation Kasur.

About the collection of circumstantial evidence, the report says that a tractor trolley, broken articles including TV, papers including “Taweez” etc, broken lock, torn police uniforms and wooden rods were used to torture the couple.

Statements of eight witnesses, as well as four police officials have also been recorded under Section 161 of the CrPc.

According to the report, on November 4, Rescue15 service was informed that one woman at the brick kiln had allegedly disrespected the Holy Quran by burning its pages, and that a mob had gathered around her.

At the time, SI Muhammad Ali, ASI Abdul Rasheed and other police officials were patrolling on Adda Manga Road. When the discovered that a mob had gathered at Yousaf Gujjar’s brick kiln in Chak 59 and were reportedly torturing a Christian family, they rushed to the spot.

When police officials reached the spot, they found between 500 and 600 people gathered there. The police said that they tried to stop the mob from damaging the brick kiln’s roof, but were beaten back and even tortured by the mob.

In the meantime, the mob managed to get to Saima and Sajjad Masih and tortured them in the presence of police as well as Iqbal Masih, Shahbaz Masih, sons of Nazir Masih, Imran Masih.

The report adds that the police officials tried to free the couple from the clutches of the crowd but were thwarted. Then, in the presence of police officials and witnesses, seven nominated suspects including Yousuf Gujjar, along with eight to 10 other people thrust the couple into the kiln.

Earlier, the country’s Catholic prelates and religious congregation leaders had moved an application in the apex court asking for the implementation of the court’s June 19 landmark verdict about the protection of minorities’ rights and promotion of religious and social tolerance.

Both organisations further called for a fair investigation of the case. The copy of a two-page letter has also been sent to the United Nations Council on Human Rights.

“A fair investigation of the incident should be conducted and the perpetrators of this gruesome crime be brought to justice by setting a strong precedence for the future,” says the letter.

The Catholic prelates also demanded that the government take measures to stop the misuse of the blasphemy laws by adopting the recommendations of the Gojra Inquiry Commission 2009.

They stated that while the government’s response is appreciated, serious measures need to be taken in order to ensure that such incidents do not happen in the future.

They recommended stringent measures to control incidents of mob violence by training and sensitising its police force and hold them accountable in future for any negligence on their part.

Similarly, World Human Rights International Thailand has also sent a letter to the CJ seeking direction on the registration of cases under section 295 PPC against 600 persons who were allegedly responsible of the murder of Christian couple.

The Express Tribune has learnt that both letters have been converted into constitutional petitions and the chief justice of Pakistan has decided to fix the case before the bench on December 16.