Red house on the yonder: The key won’t unlock the school’s door itself

Red house on the yonder: The key won’t unlock the school’s door itself 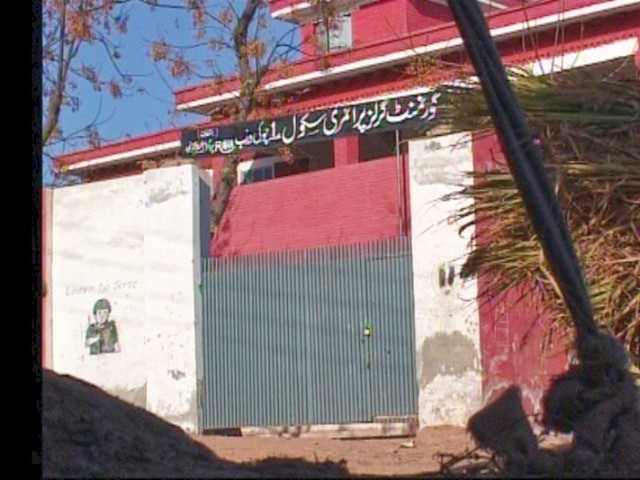 A government primary school for girls in the chief minister’s constituency has remained shut for around two weeks, contradicting the provincial government’s claim of imposing an ‘education emergency’.

Government Girls Primary School Chawki Darab in Nowshera has been locked by the landowner, depriving 400 girls from Chawki Darab and surrounding hamlets of the right to education. The owner of the land over which the school has been built, Syed Waseem Shah, told The Express Tribune he let the government construct the school on the assurance that it would employ two members of his family. He, however, claimed the government failed to honour its commitment, as a result of which he locked the school.

“We are willing to open the school and let the girls get an education whenever the government fulfills its promise,” he said. Shah said he has approached the education department authorities in both Nowshera and Peshawar, but to no avail. “They left us with no option but to lock the school.”

On the outside, looking in

The students and four teachers arrive at the school’s gate nearly every morning, only to be turned away. “We are very disheartened and request the government to resolve the matter at the earliest,” said Rubeena, a fourth grade student.

“Our annual examinations were to begin in February but now we are uncertain,” said Natasha, a student of class five. One of the teachers said the closure was causing a lot of distress, adding they have already approached the high-ups and brought the matter to their attention.

“We have lodged a formal complaint with the police but they are reluctant to open the school and take action against the landowner,” said District Education Officer Female Roobeena Qureshi.

Regarding the matter of giving employment to the landowner’s relatives, Qureshi said there is a procedure for appointment and recruitment in the education department. The relevant committee has already recommended the appointment of the landowner’s son and there is no justification in locking the school and depriving students of education, she added.

Gul Wali, an elder of the area, said they have also approached Chief Minister Pervez Khattak through his personal staff, but he is yet to respond.