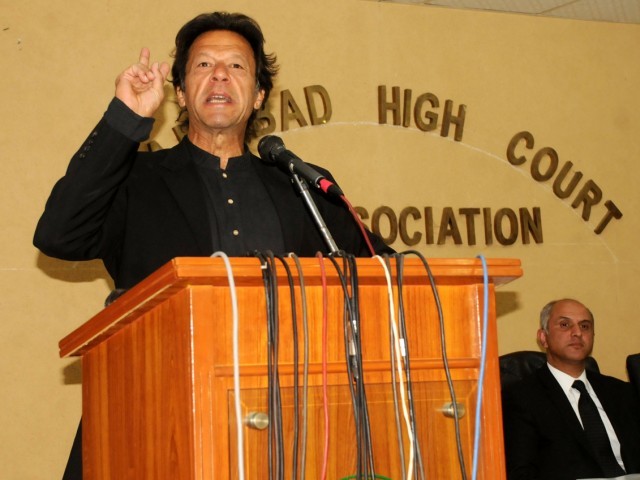 “There must be investigations by a powerful judicial commission comprising independent judges of the Supreme Court within the given time frame,” said Imran Khan. PHOTO: WASEEM NAZIR/EXPRESS

While Imran Khan’s Pakistan Tehreek-e-Insaf (PTI) party seems all set to shut down the entire country on December 18 following its side-shows in Karachi and Lahore, the government’s team on Thursday finally resumed the long-stalled talks with PTI negotiators.

They have exchanged their initial demands with each other, sources privy to the development told The Express Tribune.

Federal Minister for Planning and Reforms Ahsan Iqbal led the government side while Asad Umar represented the PTI. They held their first round of talks along with their legal teams in Islamabad.

The government team is said to have asked the PTI to postpone its announced December 15 Lahore shut-down call while the PTI in exchange demanded to let the commission to open ballot bags of NA-122 either on Sunday or before December 15.

Sources said the Ahsan Iqbal-led team urged the PTI to postpone its Lahore lockdown plan, which would create the right ambience for the talks to run smoothly.

They two sides decided that other issues including the formation of Judicial Commission would be discussed in the second round of negotiations.

The sources pointed out that the PTI also laid a demand before the government’s team to ask Speaker of the National Assembly Ayaz Sadiq not to challenge the tribunal’s decision and facilitate the commission to do its job to open and examine the ballot bags of NA-122.

On December 8, Kazim Ali Malik, an election tribunal judge, had appointed a one-man commission to open the ballot bags and inspect the election record of NA-122 on Imran Khan’s petition.

The tribunal appointed former additional district and session judge Ghulam Hussain Awan as commissioner directing him to examine the election record of the said constituency and submit an audit report within two weeks.

It is pertinent to mention that Ayaz Sadiq, who defeated Imran Khan in the May 11, 2013 general election, got stay order from the Lahore High Court against the tribunal’s proceedings but the court on November 20 vacated the stay order after a gap of one-and-a-half years.

Ayaz Sadiq and his lawyer announced that they would challenge the tribunal’s decision in the higher judiciary and try to get another stay order but have not challenged the decision in the court yet.

The sources said the government’s team did not make any promise with the PTI team about Sadiq’s position but said that on Friday due to annual Urs of Data Sahib the commission can’t sit in Lahore to examine ballot bags of NA-122.

The sources pointed out that the PTI wanted to see opening of the ballot bags on Sunday or before December 15 as it believed that the Punjab government is creating obstacles in the way of the commissioner to start its work.

They said that if the government concedes their demand then the PTI might postpone its Lahore shut-down call.

If the government does not accept their demand then they will implement their Lahore lockdown plan and their talks would then be focused on the formation of the judicial commission.

Ahsan Iqbal told reporters afterwards that both sides held their first round of talks and that he was very hopeful about their success.

He predicted that their second round of dialogue would start either on Saturday evening or Sunday morning.

Meanwhile, the Pakistan Tehreek-e-Insaaf has welcomed the government’s decision to engage in talks without any preconditions but there are limited chances that the party would defer its already announced schedule for protests in Karachi and Lahore except the call to shut down the entire country on December 18, barring any last-minute change.

“There is a likelihood that the PTI might defer the call to shut down the entire country on December 18 but not the protest calls of Karachi and Lahore,” a PTI official told The Express Tribune on Thursday.

“The postponement of PTI’s call for countrywide shut-down would all depend on the status of talks with the government,” he added.

Moreover, PTI Chairman Imran Khan welcomed the resumption of the stalled talks and stressed for investigations into rigging allegations in 2013 general elections.

“There must be investigations by a powerful judicial commission comprising independent judges of the Supreme Court within the given time frame,” he said. The PTI chief said this while addressing Islamabad High Court Bar (IHCB) on Thursday.

“PTI would continue its peaceful and democratic movement till justice is served,” he affirmed.