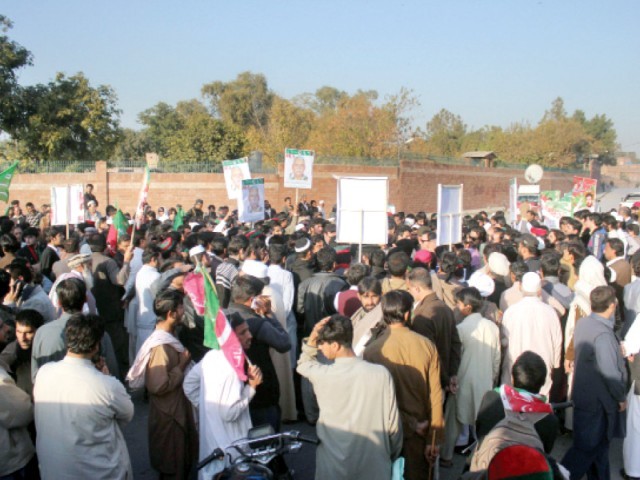 Strongly condemning the death of its worker Haq Nawaz in Faisalabad on December 8, PTI has accused the ruling PML-N of unleashing its ‘Gullu Butts’ to create turmoil.

Addressing protesters, Peshawar PTI President Yasin Khalil accused “PML-N goons” of carrying out an extreme act of violence, saying PTI was simply exercising its right to protest.  Khalil said the attack on his party’s workers in Faisalabad was orchestrated under a well-thought out plan.

According to Khalil, PML-N’s efforts to deter PTI had backfired and protests have spread across the country. “The federal government has little choice but to submit to the PTI,” he said.

PTI workers in Swabi demonstrated against Haq Nawaz’s murder. Speakers on the occasion said PTI protests had been peaceful since the Islamabad sit-in on August 14. They accused the PML-N of trying to aggravate the situation and incite violence.

PTI workers, led by MPA Obaidullah Mayar, gathered outside Mardan Press Club and burnt tyres on the main road, suspending traffic in the city. Addressing the protesters, party district leaders said Haq Nawaz’s death would not be in vain and Imran Khan’s dream of a corruption-free Pakistan would come true.

The Swat-Besham Road at Alpuri was blocked for traffic by PTI workers in Shangla, led by district president Rahamzada Yousafzai, resulting in massive problems for commuters.

The demonstrators threatened to block the entire district if authorities failed to bring Haq Nawaz’s killer to justice.

Meanwhile, PTI workers in Kohat offered an absentia funeral prayer for Haq Nawaz in Company Bagh. During a later demonstration in front of Kohat Press Club, district president Humayun Pehalwan said the Nawaz government had failed and should resign. He demanded a transparent investigation into the PTI worker’s death.

Another rally was held in Charsadda, starting from the press club before ending at Farooq Azam Chowk. PTI MPA Arif Yousafzai said sacrifices like Haq’s would see the PTI achieve its destiny and end dynastic politics in the country.

Protesters led by Bannu PTI President Matiullah also gathered  to condemn Haq’s killing. District leaders said PTI had now started a movement to put the country on the road to development. However, the demonstrators were forced to disperse soon because an IED blast targeted security forces in the district.

*With additional input from our correspondents in K-P