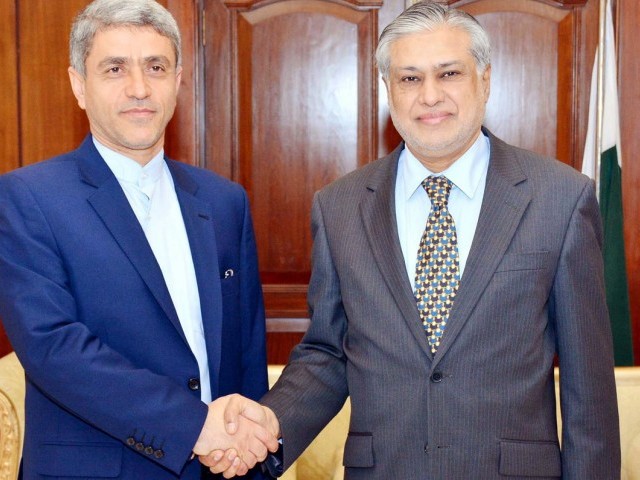 Pakistan has informed the United States that it will not fully normalise economic ties with Iran until Washington lifts its sanctions. Islamabad has also expressed its inability to open Iran’s Melli Bank branches and return Iranian deposits.

The decision was conveyed to the US treasury through a letter written by the finance ministry, hours before Pakistan and Iran were set to engage in negotiations to resolve outstanding commercial and economic ties, revealed top officials of the ministry.

“We will deal with Iran only on humanitarian grounds and barter trade is one such option,” said an official while seeking anonymity.

This is seen as a delicate move by Islamabad to maintain relations with both Washington and Tehran. “At least export of food items to the friendly country should continue until sanctions are eased,” Dar said.

During the two-day Pakistan-Iran JEC meetings that started here on Monday, Dar told the Iranian minister that there would not be any progress on the gas pipeline project before international restrictions were removed.

“Owing to the curbs on Iran, Pakistan has been unable to complete the project on its side,” said Minister of Petroleum and Natural Resources Shahid Khaqan Abbasi during the meeting.

“Despite our best efforts, banks, international contractors and equipment suppliers are not ready to get involved in this project,” Abbasi was quoted as saying in a handout issued by his ministry.

Dar told his counterpart that his government could not return $216 million to Tehran that the Iranian government had deposited in KASB Bank, which is currently under supervision of the State Bank of Pakistan.

“We offered to supply wheat and rice in return for Iranian deposits,” the official said.

The establishment of branches of Melli Bank of Iran in Pakistan and a Joint Venture Bank was also on the JEC agenda. However, the government said it would not be able to allow opening of Melli Bank branches as the bank was on the US list of entities that were facing sanctions, officials told The Express Tribune. They, however, pointed to the possibility of opening a bank which was not on the US list.

The issue of buying Iranian oil in return for commodities like sugar and wheat was also discussed by both the finance ministers. They also discussed the problem of increased smuggling along the border due to the restrictions on doing business with the Iranian government. Pakistan is said to have deliberately overlooked the issue.

The Iranian minister said negotiations with the international community on the nuclear issue had been successful and hoped that the sanctions would be removed very soon.

He was of the view that with the removal of international sanctions, Iran’s trade volume and economic relations with its neighbours would further improve. During the two-day talks, both sides will also discuss import of energy from Iran – over 1,000MW for Balochistan, according to the finance ministry.

Middle-income class: Power tariff to come down by 20%